Jake married a woman named Sadie on September 7th, 1896. The two lived on a ranch, northeast of the abandoned site of Colter in Ambarino. The couple shared the work on the ranch evenly, and their marriage was stable. Sadie regarded him as the best man she ever met.

In May 1899, the couple's ranch was attacked by members of the notorious O'Driscoll Boys. Jake was murdered by a member of O'Driscolls during the assault and his corpse was thrown into a wagon close to the couple's residence, while Sadie hid in the cellar to avoid a similar fate.

The player first meets Jake at Adler Ranch for a job. When the player enters the ranch, Jake immediately suspects the player to be there to rob him and panics. After some guessing, Jake understands the player is there looking for a job and calms down, and tells the player he is desperate for help as the ranch keeps getting robbed.

Subsequently, his wife, Sadie, comes in; she is immediately suspicious of the player and aims her rifle at them, but Jake clarifies the player's intention and pleas to her that they need to trust someone for help. Sadie begrudgingly lowers her rifle and tells the player that she will kill them if they rob the ranch. Jake then tasks the player to retrieve a stolen wagon, and promises to pay them handsomely for it. The player can visit him at his ranch during daytime for missions, while Sadie is available during nighttime. His missions give positive honor.

Three days after his death, Jake's corpse was found by Micah Bell when he, Arthur Morgan and the Van der Linde gang's leader, Dutch van der Linde, came to the Adler Ranch in search of aid and supplies during the snowstorm. The trio then attacked, killed the O'Driscolls and rescued Sadie, while Micah was later told to properly bury Jake's body, although he most likely didn't since no grave can be found upon revisiting the post-destroyed ranch.

Jake's death had a massive impact on the broken Sadie, who was taken in by the Van der Linde gang. After a period of mourning, she became an active member of the gang and ultimately avenged Jake by sabotaging the O'Driscolls' attempt to save their leader Colm from hanging, and by murdering the remaining gang members at Hanging Dog Ranch - including the “fat man with a beard” who killed Jake.

Jake's personality contrasts with that of his wife, Sadie. Jake is comparably friendlier and more trusting towards the player. After knowing the Red Dead Online protagonist is there to help him, he is quick to calm down and ask them for help. He persuades Sadie, who is suspicious of drifters, to not kill the player as he knows that he needs their help. This makes it evident that Jake is calmer and helps restrain Sadie's more impulsive and severe judgments. He is more shy to ask the protagonist for help, as he admits he has a long-winded way to do so. He also reveals to the player that he still gets lost in the snow from time to time, and is less used to the surrounding harsh landscape, unlike Sadie. He is also fond of reading books, as he is always seen doing so in his ranch. This peacefulness is also a contrast to Sadie, who is always seen cleaning her repeater and ready to defend the ranch.

Jake is also afraid of being scolded and blamed for his mistakes. He can task the Protagonist to rescue his creditor, and reveal to them that Sadie is not informed of his indebtedness. He begs the player to keep this secret as he claims Sadie will "kill him" if she finds out. Nonetheless, his marriage with Sadie is a very happy and stable one. He is regarded by Sadie as the best man she has known.

Jake featured with his wife (behind the ladder) 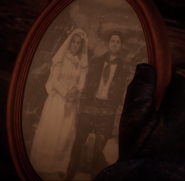 Retrieved from "https://reddead.fandom.com/wiki/Jake_Adler?oldid=385683"
Community content is available under CC-BY-SA unless otherwise noted.