Jean Marc Mercier is a minor character featured in Red Dead Redemption 2. He takes part in the Stranger side-mission "Idealism and Pragmatism for Beginners".

Jean Marc Mercier was a Frenchman who became the lieutenant of Henri Lemieux, the mayor of Saint Denis, at some point prior to 1899.

At some point after the party, Arthur gets a letter from Mayor Lemieux, offering him work as a personal enforcer of sorts and asking him to come to his residence at night. Jean Marc lets the protagonist in and later helps them to locate Professor Shiftacre, who Lemieux wishes to intimidate in order to stop him from revealing that a number of the city's paintings are fake. After the Professor is dealt with, Jean Marc expresses his disapproval of Lemieux's corruption.

Later, Lemieux decides to force Hector Fellowes, a wealthy newspaperman, into funding a library in the city. The mayor begins telling the player his location, but he is interrupted by Jean Marc, who says he is leaving the city in a stagecoach. On the way out, Jean Marc expresses his disgust at Lemieux's actions and has nothing further to do with the intimidation of Fellowes.

Soon after Fellowes is successfully intimidated, Lemieux informs the player that Jean Marc plans on spilling dirt on both of them to the press, including information on the protagonist's criminal background. The player goes to Jean Marc's house and confronts him, before knocking him unconscious and taking him back to Lemieux's house. Jean Marc is brought to the garden at the back, and a heated argument with Lemieux over the latter's corruption ensues. Eventually, Lemieux commands the player to kill Jean Marc and promises to reward them handsomely for it, before walking away. Jean Marc's fate is then left in the hands of the player:

If the player decides to kill Jean Marc: The protagonist kills Jean Marc and dumps his body in the water nearby. If this option is chosen, the player will lose Honor, and Lemieux will remain as the mayor of Saint Denis. Additionally, the player's reward comes in the form of a 10% off in every store in the city.

If the player decides to spare Jean Marc: Alternatively, the player can choose to spare Jean Marc, in return for being left out of his accusations. Jean Marc is grateful, and gives the protagonist his word that he won’t mention him, before running away. If this option is chosen, the player will gain Honor, and Jean Marc reveals Lemieux's corruption to the press, causing his impeachment and leading to himself becoming the new mayor of Saint Denis. A few days later, the player receives a letter from the mayor's office, thanking him and confirming Lemieux's resignation.

Jean Marc is shown to be an honourable man and an idealist, the opposite of Henri Lemieux, a dishonourable pragmatist (hence the mission's name) of dubious legality. He wishes that the city is run by “men of honour”, and will keep his promise to the player if spared. 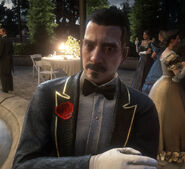