Town of Valentine in The Heartlands, State of New Hanover

Jeb is presumably a resident of Valentine, New Hanover.

In "A Quiet Time", Arthur takes Lenny for a drink in Smithfield's Saloon to help calm him down after learning of Micah's arrest in Strawberry. At some point during the evening, Jeb interrupts Arthur and Lenny's conversation by mocking them. Arthur can threaten him, charm him, or beat him.

If the player chooses to beat him, Arthur slams Jeb against the bar counter, then drags him outside and tells him to leave. Choosing to threaten him results in Arthur stating that he'll kill him and warns Jeb to leave. The option to charm Jeb has Arthur telling him that he's a "charming" person but wants to talk to Lenny in private. Irrespective of which choice the player makes, Jeb no longer harasses Arthur and Lenny.

As the duo continue to get drunk in the saloon, Jeb returns and joins them in drinking, but Arthur is annoyed at seeing him again; he takes Jeb outside to a water trough to drown him, where the player can choose to drown him more forcefully. Regardless, Jeb breaks free and alerts the law to arrest Arthur and Lenny.

Eight years later, in the mission "Gainful Employment", Jeb and Bubba can be seen harassing Sadie Adler in the Smithfield's Saloon. Bubba continues to antagonize Sadie until she stabs him in the hand, after which she smashes a glass drinking cup on Jeb's head. John arrives and pulls a knife out on Bubba, telling the two men to get out of the saloon "before she kills us all!", to which the two men comply.

Arthur getting annoyed at Jeb 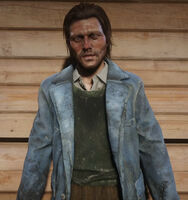