“With faith, I can achieve great things.”

Jenny is a minor character and a Stranger featured in Red Dead Redemption. She appears in the game's opening cutscene and gives the player the Stranger side-mission "Jenny's Faith".

Jenny is an optimistic missionary sent to the American west to try and spread the Christian faith.

Jenny makes an appearance during the mission "Exodus in America", in which she is riding on the train to Armadillo. She is talking to the Preacher about bringing the Christian faith to the West, and bringing "civilization" to the Native Americans.

Jenny later appears during the Stranger side-mission "Jenny's Faith", in which Marston finds her in the wilderness of Cholla Springs, testing her faith in God. When Marston finds her, she is very ill. When offered help, she declines, claiming that the Lord will save her. It is left to Marston to bring her some medicine. Once he brings it to her, she thanks the Lord - and not Marston - for saving her, saying it was his will that caused him to do such a good deed. Marston offers to give her a ride back to Armadillo, but she declines, still clutching to the belief that her faith will keep her alive. 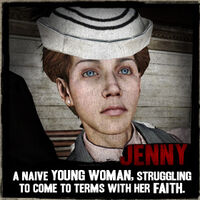 Jenny speaking with the Preacher.

Jenny crying before the cross

And upon the completion of her mission, Jenny can be used to acquire the following Achievement/Trophy:

Retrieved from "https://reddead.fandom.com/wiki/Jenny?oldid=398404"
Community content is available under CC-BY-SA unless otherwise noted.