Jeremiah Compson is a minor character featured in Red Dead Redemption 2. He is the subject of the Stranger mission "The Iniquities of History".

Jeremiah's father and grandfather had been slave catchers before him. He married a woman named Betsy and had a son prior to 1855, while having a career as a slave catcher and administrator at the Ascension Plantation in Rhodes. Eventually, due to the abolition of slavery following the Civil War's end, the plantation no longer required his services and he was thus made redundant.

At some point later, he got a job working for the Central Union Railroad Company, but was fired by the company after large amounts of complaints from both customers and fellow employees. Due to a falling-out of some kind, Compson also became estranged from his son, Rance.

The court eventually seized his house and possessions, granting ownership to the Bank of Rhodes under the order given by Judge Meredith Holden on November 18, 1895. As a result, Compson became homeless and turned to a life of alcoholism. He subsequently set up an encampment around Eris Field.

Compson is first encountered on a bench outside of the Rhodes Train Station, where he informs the player about how his once-respectable life fell apart and how he lost everything. The protagonist offers to break into his old home and retrieve three of his possessions: his old pistol, a ledger, and a valuable pocket watch.

During the search, the player discovers that Compson was once a slave catcher by the notes in his ledger, often writing how proud he was of the work he did in the position. The protagonist is disgusted by his findings and confronts him at his camp. Compson rants about how his life fell apart, how the public no longer respects him and how he lost the job he loved so much. The player then throws his possessions into his campfire, causing Compson to cry and fire the pistol at the player. However, due to its age and disrepair, the gun jams and Compson curses the player for destroying his possessions. His fate is then left for the player to decide - they can kill him, or simply walk away.

Arthur and Compson in Rhodes 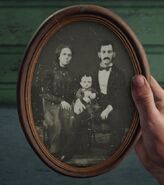 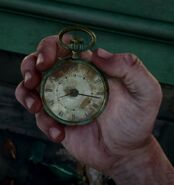 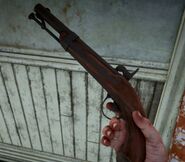 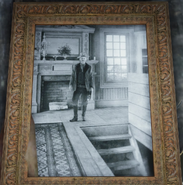 A photo of Compson standing next to his trap door 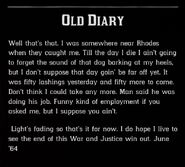 A diary entry of a slave's capture in the Civil War 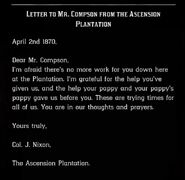 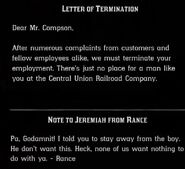 The beginning of the end: employment termination and estrangement from his family