Jeremiah Shaw is a major character and one of the main antagonists featured in Red Dead Online.

Jeremiah Shaw is a wealthy banker and real estate speculator who was a business associate of Philip LeClerk and Amos Lancing.

At some point in 1898, Shaw, Amos, and Grace Lancing conspired to take over Philip's business and had Grace's outlaw brother, Teddy Brown, murder him in Blackwater. Not long after, his widow Jessica LeClerk came to suspect that they were behind the murder and had her bodyguard Horley release the protagonist, who was wrongfully accused of killing Philip, from prison so that they could help her exact revenge.

When Teddy Brown is targeted by Jessica, the protagonist's posse and a number of sheriffs and U.S. Marshals, Shaw and Amos try to pressure them into leaving Brown be. However, the protagonists ultimately subdue Brown, who admits to murdering Philip before Jessica executes him.

Shortly after Brown's death, Shaw and Amos try to finalize their takeover of Philip's business by having Jessica sign a forged contract. They arrange a meeting in Blackwater, which ends with an enraged Jessica shooting Amos dead. Shaw attempts to escape with the forged documents, but Horley and part of the protagonist's posse corner him and retrieve them. Upon discovering the files are forged, Horley calls Shaw a lowlife and orders him to flee, which he does.

Jeremiah Shaw comes across as a very cowardly man. During the shootout in Blackwater, Shaw runs away and is visibly terrified when Horley and the protagonists corner him. He is also very greedy, as he and the Lancings planned to have Philip LeClerk killed in order to take control of his share of the business, despite already controlling a significant share. They went so far as to try to have Jessica sign a forged document to achieve their goal.

Furthermore, Shaw is a liar who tries to talk his way out of dangerous situations. When Horley and the protagonists confront and hold him at gunpoint, he claims that he was not involved in Philip's murder and that he was blackmailed by Amos Lancing. 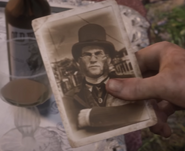 A photo of Jeremiah Shaw.