Gill Landing in The Heartlands, State of New Hanover

Jeremy Gill is a minor character featured in Red Dead Redemption 2. He initiates the stranger side-mission "A Fisher of Fish".

Jeremy Gill is a famous fisherman known for capturing exotic fish and fishing with famous people from around the world. He has written articles that have been featured in newspapers across the Southern United States, and has authored several books and pamphlets on the subject.

The player can encounter Jeremy fishing on the pier on which his house sits upon. Jeremy assumes the player is a fan and asks if he would like an autograph or a photograph with him. After a short conversation, Jeremy asks the player to send him a number of large, rare fish that they are to catch, as long as they are at least twenty-four inches long and weigh at least ten pounds. He gives the player his card and a map, which pinpoints the locations of the legendary fish on the map.

After catching all of the legendary fish, Jeremy sends the player an invitation to his home in the mail. When the player arrives, Jeremy is fuming about his critics and announces that he intends to seek out a certain large catfish in Río Bravo and that he wants the protagonist to take a photograph of him catching it to disprove accusations of him being fraudulent. John is initially hesitant but relents to help him after he promises to reward him.

After the two reach the San Luis River, Jeremy casts his line while telling the player about himself. John takes to setting up close behind him and prepares his camera, and the two wait for the catfish. Eventually becoming bored, John falls asleep during Jeremy's continuous stories of his supposed wide fame.

When he wakes the next day, Jeremy is still bragging about his exploits and standing with his fishing line in the water. Suddenly, however, the line is finally tugged, and Jeremy struggles before he is pulled, with immense force, into the river. Jeremy is not seen again after this, although his hat and special spinner are left behind on the ground to be taken by the player. 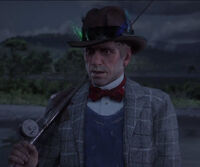 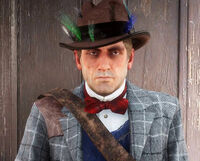