At some point prior to 1898, Jessica married a man named Philip LeClerk, whom she loved dearly. She became close friends with Grace Lancing, the wife of her husband's business partner, Amos, and was by extension, part of Blackwater's social elite.

In 1898, after her husband was allegedly murdered in Blackwater by a bystander, Jessica found evidence implicating that the Lancings, Jeremiah Shaw, and Teddy Brown had all conspired to kill Philip in order to seize full control of his business. She then sent her bodyguard and Philip's former assistant, Horley, to rescue said bystander from prison before they were executed for a crime they hadn't committed.

The protagonist is led to Jessica's camp by Horley after he and two armed men release them from a prison wagon. There, Jessica greets them and explains the reason why she had them rescued: to help exact revenge on those responsible for killing Philip and framing the protagonist for the crime. After providing the protagonist with a fresh set of clothes, Jessica assigns JB Cripps to help them set up a camp and allows them to leave on the condition they return the favor when the time comes. She later sends Horley to investigate Philip's murder and give the protagonist some leads on work until they can aid in Jessica's vendetta.

After Jessica and Horley gather enough evidence to prove Teddy Brown killed Philip, they meet with the protagonist and their posse meet near Fort Mercer, the hideout of Brown's outlaw gang, which they prepare to besiege with the help of local law enforcement and several U.S. Marshals. Jessica provides the protagonists with metal-plated armor and is anxious to witness Brown's death, but Horley advises her to stay behind for her own safety and reputation. Once Brown's gang has been killed and Brown himself incapacitated by the protagonists, Jessica arrives and interrogates Brown about Philip's murder. Brown admits to killing Philip, though he expresses no remorse, and refuses to reveal who ordered the hit. A frustrated Jessica promptly executes Brown, before thanking to the protagonists and leaving with Horley, who she tells to pay the protagonists for their help thus far.

Shortly after Brown's murder, Amos Lancing and Jeremiah Shaw invite Jessica to meet them in Blackwater. Suspicious of their intentions, she and Horley ask the protagonist's posse to accompany them. In Blackwater, Lancing greets Jessica and states that he misses Philip and feels bad about his death. He claims that he had nothing to do with her husband’s death and agrees with her that Brown deserved to die. Lancing then informs Jessica of a supposed agreement he made with her husband that in the event of one of them dying, the other would inherit the business in exchange for a nominal sum. Jessica accuses him of lying and Lancing states that she signed the agreement last year. He states the signed document is with Shaw and that she will only be able to inherit $500 dollars worth of her husband’s property. Knowing that her husband’s property is worth more than that amount, Jessica becomes furious with Lancing, and abruptly pulls her revolver from her purse to shoot him dead.

Following a shootout with Lancing's guards, the protagonists help Jessica get to safety and Horley to retrieve the documents from Shaw, discovering they are forged. After escaping from Blackwater, Jessica states that confronting Grace Lancing, the last of the conspirator's to have Philip killed, will have to wait, and that she and Horley need to find a way to clear their names after everything that occurred recently. Jessica then thanks the protagonists for their assistance, calling them her true friends. After paying them for their services and advising them to not get into too much trouble, Jessica leaves with Horley to go into hiding.

Jessica LeClerk shows herself to be a well-mannered and resourceful individual. Upon her first encounter with the protagonist, she conveys her intentions of seeking revenge on those who both betrayed her and wronged them, through calculating means. All the while, possessing an awareness of the complex details within conflicts she becomes involved in as a whole. However, her behavior shifts starkly rash when confronted with the opportunity of achieving revenge in the name of her deceased lover. In doing so, she comes at odds with her closest friend, Horley, ignoring and even outright rejecting his advice in these situations.

While having been an individual with close ties to high society before her husband's murder, Jessica shows a sense of empathy for those around her beyond maintaining inconsequential preferences in her lifestyle. Alongside this, she chooses to step out of what would be considered her normal boundaries more often than not to confront those responsible for the loss inflicted on her. Yet, her bolder actions reveal the psychological damage she suffers from trauma. Her initial aversion to conducting an act of violence herself turns indifferent, as shown when she mercilessly executes Teddy Brown. When abruptly doing so again under arranged circumstances and reflecting shortly afterward, she admits she didn't know she had done so until after she had pulled the trigger.

In regards to how she treats those she employs, she is very generous, paying the protagonist and their posse handsomely for their assistance when she calls upon it. Later, she begins to express her gratitude more openly by calling them true friends of hers. 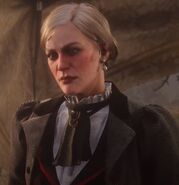 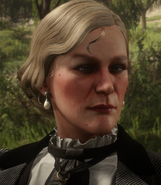