Jesuit Missionary is a point of interest in Red Dead Redemption 2. This set of skeletal remains is located at the west end of New Austin, and is east of the Sea of Coronado.

These appear to be the bones of a man who perished while travelling through New Austin some time prior. Inspection of the remains reveal that they are over a century old, as attested by a letter found in the skeleton's faded clothing.

The letter confirms that the man, a Jesuit by the name of Rodolfo, had become disillusioned with the Catholic Church and departed a Spanish mission in California to travel east, most likely to spread the word of his faith. The author of the note, Cardinal Blanco, has attempted to dissuade Rodolfo from following this potentially dangerous course, and that the younger man's mind and skills would be better used among his fellows. Regardless, it appears that Rodolfo undertook the "vainglorious journey alone," as Blanco feared, and perished in the attempt. Whether he died of exhaustion, starvation, animal attack or more sinister causes is unknown. 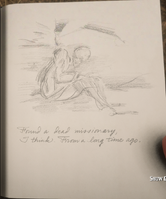 Arthur's drawing: "Found a dead missionary, I think. From a long time ago." 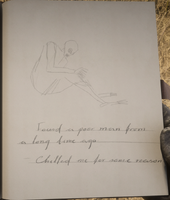 John's drawing: "Found a poor man from a long time ago. Chilled me for some reason."