Jimmy Saint is a minor character and Stranger featured in Red Dead Redemption. He appears in and gives the player the Stranger side-mission "Funny Man".

Jimmy Saint is a naïve journalist from the American East Coast, writing for a magazine based out of New York City. He is traveling through the American West to gather material to write an article on the region. He is most commonly known as Jimmy or the "Funny Man".

He is first encountered at Benedict Point. In the game, the player saves him from numerous gang hideouts scattered over the map. The first hideout is Gaptooth Breach, then Pike's Basin and finally Tesoro Azul. After being saved for the last time, he expresses regret for coming to New Austin and says he will pursue other ventures never to be seen again. 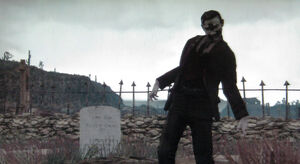 During the Undead Nightmare, Jimmy returns in Tumbleweed's cemetery as an enemy undead. In his introductory cutscene he raises from his grave saying "I'm gonna have the time on my life, sport!". During the fight with him, he can be heard saying "I tell ya mister, the time on my little old life." His grave stone states that he died in 1911 from a gunshot wound and bears the phrase: "A humorist who rarely had the last laugh".

Jimmy on his steed.