Jon is a middle-aged western man with a long, grayed, unkept beard. Much of his worn-out clothing has been made from animal pelts or hides, most notably his classic raccoon mountain hat.

Jon looks considerably older in 1907 than he does in 1899, with grayer complexion and more aged skin, as well as being blind in his left eye. 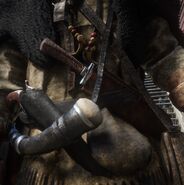 Retrieved from "https://reddead.fandom.com/wiki/Jon?oldid=394507"
Community content is available under CC-BY-SA unless otherwise noted.