Not much is known about the gap other than it is a natural formation with two egress and ingress.

During the Undead Nightmare, the gap is brimming with demonic, carnivorous hordes of the undead, thus making it a good spot to complete Explosive Rifle Mastery rank 3, in which the player needs to kill three Undead with one Explosive Rifle Bullet.

It is a small gorge, possibly an arroyo, that runs northwest from the train tracks southwest of Armadillo towards Odd Fellow's Rest.

A Tight Squeeze in the Gap 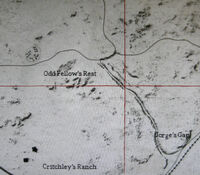 Jorge's Gap on the map

Jorge's Gap from above

Jorge's Gap from the top

Jorge's Gap from bird's eye from the north

Jorge's Gap from bird's eye from the south

Retrieved from "https://reddead.fandom.com/wiki/Jorge%27s_Gap?oldid=385798"
Community content is available under CC-BY-SA unless otherwise noted.