Jorge Montez is the brother of Alfredo Montez, cousin of Carmella Montez, and a member of the Del Lobo gang.

Marshal Tom Davies hires the protagonist and their posse to help him capture Alfredo Montez. Alfredo and the Del Lobo gang were supposedly spotted near Manzanita Post, so Davies takes them to his informant Lee, who knows where the Del Lobos are hiding. Lee guides the protagonists through the woods, killing several Del Lobos along the way. They eventually reach Swadbass Point, where they find who Lee believes to be Alfredo and his men, and kill them all in a gunfight.

Once he identifies the corpse of who he believes is Alfredo, Lee severs the head before he and the protagonists return to Davies, only for him to reveal that the man they killed was actually Jorge. Davies nonetheless pays the protagonists and Lee, as Jorge was also a wanted criminal. Afterward, Lee tosses Jorge's head on the ground. 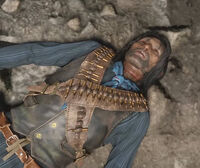