Trelawny was born in Cornwall, England - though he has no memory of it. He eventually emigrated to the United States. A conman who is also described as a conjurer and trickster, Trelawny joined Dutch van der Linde and his gang several years prior to 1899. He is known to abandon the gang at points, sometimes even for months on end, but always comes back. Trelawny, at some point, settled down in Saint Denis with a wife and two sons named Tarquin and Cornelius, but frequently disappeared and reappeared with them as well.

The protagonist can find Trelawny at his caravan on the outskirts of Rhodes. If approached, he will ask if his wife sent them, before stating that it's a long story. He then pulls out a Cattleman Revolver and points it at his head, seemingly eager to end his life, as he claims he can't take it anymore. However, he suddenly becomes optimistic again, and his gun transforms into a bird that flies away. Trelawny then claims that he loves his family and that he is a lost soul, but is unsure of what that actually means. Quickly changing the subject, Trelawny enlists the protagonist's help with a "totally legal" job: to steal a horse belonging to Catherine Braithwaite and deliver it to his contact in Scarlett Meadows.

After completing this mission, Trelawny can be found at his caravan again, where he will offer more jobs to the player, including rescues, escorts, horse thefts, and hunting. His missions usually give negative honor.

Trelawny is first encountered in Valentine after the fight between Arthur and Tommy, where he reports that Sean MacGuire has been captured by Ike Skelding's bounty hunters. Dutch sends Trelawny, Javier, and Charles down to Great Plains, who are later joined by Arthur. When Arthur arrives, they survey Blackwater from a distance, but quickly realize that it is swarming with Pinkertons, meaning that they cannot risk entering the town to find Sean. Charles is sent to find a vantage point from a distance, while Arthur, Trelawny, and Javier follow the bounty hunters' boat up the river. After encountering some of the bounty hunters, Trelawny distracts two of them to allow Arthur and Javier to silently kill them, before taking his leave. Ultimately, the mission is successful and Sean is rescued.

Trelawny is next seen when Hosea, Dutch, and Arthur are on a ride after moving to a new camp location. Trelawny is seen locked up in the back of a wagon, which is being pulled by Sheriff Gray and his deputy, Archibald MacGregor. The two lawmen tell the gang that Trelawny was involved in an illegal gold prospecting operation, and is being taken to the Rhodes jail as a result. Suddenly, several other criminals in the wagon break free, forcing Arthur and Archibald to chase after them. After capturing the fugitives, the Sheriff lets Trelawny go as gratitude for Arthur's help. Following his release, Trelawny stays in a caravan north of Rhodes.

Concerned over the reports of "super agents" in the area and Trelawny's apparent disappearance, Dutch later asks Charles and Arthur go to check on Trelawny. The pair investigate his caravan and find signs of violence, before deducing that he must have been taken by bounty hunters. The two track his trail to the woods, where they find two men - with Trelawny's broken cane next to them. Arthur defeats one in a fight, while Charles subdues the other. After being interrogated by the pair, the bounty hunter reveals that Trelawny is being held on a nearby farm. The pair venture over to the nearest farm, where they find more bounty hunters who have Trelawny captured. The pair free Trelawny and eventually manage to vanquish the remaining bounty hunters hiding in the maize fields. Due to the ever-increasing danger, Trelawny decides to stay with the gang at camp.

Trelawny later leads Arthur to the post office in Rhodes, whose clerk, Alden Carruthers, sells stagecoach robbery tips in exchange for two dollars a piece. After acquiring their robbery tip, Trelawny and Arthur head out to rob a stagecoach carrying Chester Damsen. To do so, Trelawny puts on a performance to distract her and the stagecoach guards, while Arthur loots the stagecoach. Afterwards, the two split the money between them and Trelawny tells Arthur he can pay for more tips from Alden, or from another clerk stationed at Strawberry.

Trelawny organizes the robbery of The Grand Korrigan, a lavish riverboat carrying a substantial amount of cash in its vault. He works to ensure that Javier gets a job as a security guard on the vessel, that Strauss gets the job of spying on Desmond Blythe's cards to aid Arthur, and ensures that the card dealer gives Arthur the correct cards. Trelawny takes Arthur to the barbers to get a clean shave that will allow him to fit in better, and the tailor, for him to buy an appropriate suit. He and Arthur then get a ride to the riverboat in a carriage, and board it. After Javier and Arthur retrieve the money following the latter's victory on the tables, Trelawny is seen talking to Desmond Blythe, in an attempt to appease him after his loss. However, a shootout soon erupts when the guards discover who the perpetrators were, forcing Trelawny to fight his way off the boat with the other gang members and swim to shore. After the money from the heist is shared around, he disappears once again.

After the gang begins falling apart, Trelawny eventually decides to leave. He packs his bags and quietly leaves for good after Arthur gives him his blessing. Trelawny thanks Arthur for being such a good friend.

His fate after leaving the gang is unknown, although it is presumed that he returned to his family in Saint Denis.

A man with a cunning character, Trelawny is willing to do whatever it takes to save himself. Despite considering the Van der Linde gang to be friends, he is always looking out for himself, and his interests. He fashions himself as a flamboyant and sharp-tongued gentleman who is cordial towards just about everybody but isn't afraid to get his hands dirty. He's also capable of incredible magic tricks.

He is not able to see his family often because of his job, but when he does, he makes it count with dinners and presents. He also manages to keep the criminal nature of his business a secret from them, referring to the camp as "the office" whenever they're around. An Englishman who has seemingly spent most of his life in the US, Trelawny's accent is best approximated to that of a prototype Transatlantic accent, a high-class combination of the base American and base British accents.

Trelawny has combed, dark brown hair and a bushy mustache on his top lip. In terms of clothing, he is always smartly dressed; he is usually seen sporting a black tuxedo with a blue vest underneath, a black neckerchief and shoes and robin egg blue pants sometimes with a pair of white gloves and a grey top hat. Some other outfits include a red vest with matching frock coat, black pants and gloves topped off with a bowler hat as seen during the mission "The First Shall Be Last" as well as a version without the coat and a straw boaters hat. Another outfit included is the red and black tuxedo he dons during "A Fine Night of Debauchery" as well as two other outfits only seen while at camp which are mismatched versions of his other outfits, and in "Magicians for Sport" where he has been captured and beaten by bounty hunters. 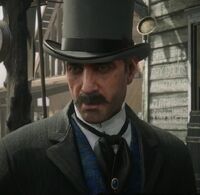 The Anderson Boys in a prison wagon with Trelawny

Trelawny listening to Chester Damsen as a distraction

Josiah and Arthur in Saint Denis

Trelawny and Arthur in George's wagon

Arthur, Trelawny, Javier and Strauss at the docks of Saint Denis

Trelawny and Arthur on The Grand Korrigan

A closeup of Trelawny during "The Fine Art of Conversation"

Trelawny leaving the gang once and for all

Trelawny sitting on his caravan's porch

Trelawny during his intro cutscene

Trelawny holding a revolver to his head; shortly before whisking it into a bird