Julius Grimes is a minor character and a bounty target featured in Red Dead Redemption.

Julius is a member of the Bollard Twins gang. He is wanted for petty theft and can be captured or killed depending on the player's choice.

Julius can most often be found around Thieves' Landing, frequently loitering inside the saloon and around the brothel.

He can also be encountered at the Pike's Basin gang hideouts; as with other members, he will be hostile upon Marston's arrival, unless the player is wearing the Bollard Twins Outfit.

His character may also be encountered during various random encounters involving the Bollard Twins gang. Julius appears with Werner Cobb as one of the two members who will lead a "Supply Run" random encounter, where he might hold a hostage at gunpoint and warn Marston to stay away.

During the "Wild Posse" random encounter, he and Gus Ballard will drag a lassoed victim across the road, which can occur either in Thieves' Landing or MacFarlane's Ranch. 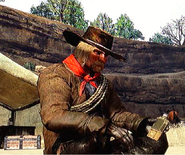 Julius in the main camp of Pike's Basin. 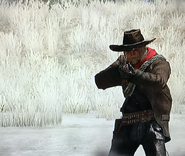 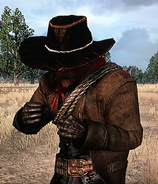 Julius tensing for a fist fight.

Julius with Irvin Pennick enjoying a campfire.
Add a photo to this gallery

Retrieved from "https://reddead.fandom.com/wiki/Julius_Grimes?oldid=382563"
Community content is available under CC-BY-SA unless otherwise noted.