A scam artist with a love for the outlaw lifestyle, Karen became a member of the Van der Linde gang sometime prior to 1899. At some point between 1895 and 1897, she helped Arthur and Javier rob a bank in Tucson, Arizona by dressing up as a Nun and hiding firearms under her clothes.[1]

Karen, along with Tilly and Mary-Beth, accompanies Arthur and Uncle to Valentine. Mary-Beth asks if they should have invited Molly too, to which Karen scoffs and replies that Molly is "high-society" now and is too good for the likes of them.

When Sean MacGuire is rescued, the pair get very drunk at the ensuing party back at camp. Sean begins telling Karen he loves her, to which she replies that he only loves her when he's drunk, she can see in his eyes that he hates her, and she hates him too. He insists that he loves her, and the pair retire to a tent where they promptly begin to make love. Midway through, Karen starts crying and Sean asks if she wants to stop, to which Karen says no, she just wants someone to "see her". Sean exclaims "I see you, Karen!" whilst the pair continue to make love. As soon as the act is over, Karen exits the tent and a disappointed Sean asks, "You're going...? Oh, well... I'll see you in the morning, then".

After the gang move to Beaver Hollow following Sean's death, Karen becomes an embittered alcoholic. At most times, she is found drunk at the camp and angrily dismisses anyone showing concern for her. She particularly is in constant turmoil with Grimshaw, especially after Susan shoots Molly for her apparently betraying the gang, berating Grimshaw for killing Molly.

Following the gang's downfall, Karen disappeared from the public eye; in a letter to John, Tilly believed that Karen had drunk herself to death.

Karen grew to love and enjoy the outlaw life she led. She is described as a bold woman and takes pleasure in drinking with her fellow outlaws. A consummate actress, Karen often employed her dramatic skills in various robberies and scams with the gang. But after the death of Sean, Karen represses into a somberly aggressive state, becoming irritated and angry in her demeanor to the rest of the gang, as she turns to alcohol to sooth her pain over the gang's apparent dissension.

Karen is a busty woman in her mid-20s[2] with blonde hair that curls at the ends and green eyes. She is somewhat older than Tilly or Mary-Beth, and also has a thicker waist than them. 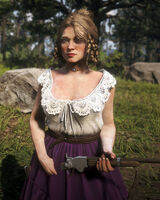 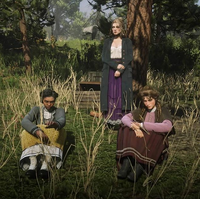 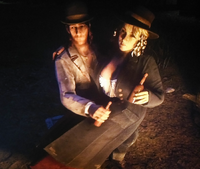 Karen Jones singing at the campfire in Horseshoe Overlook 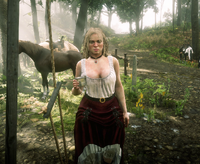 Retrieved from "https://reddead.fandom.com/wiki/Karen_Jones?oldid=399469"
Community content is available under CC-BY-SA unless otherwise noted.