Kent Gallaway is a minor character and a bounty target featured in Red Dead Redemption.

Gallaway is a Criminal wanted for murder and can be captured or killed depending on the player's choice.

Kent plays a small role in the mission "A Frenchman, a Welshman and an Irishman", in which he confronts John Marston as he approaches the cabin by Lake Don Julio. After John draws his weapon, Kent will call out to the other bandits to shoot him. He also appears in the mission "Hanging Bonnie MacFarlane" as the outlaw who kicks the stool from under Bonnie's feet at the gallows, as well as one of the outlaws who kills Norman Deek.

Kent can most often be found around Thieves' Landing, frequently loitering inside the saloon and around the brothel. He can also be encountered at the Tumbleweed gang hideout, but he will be hostile.

Kent can also be seen in a Random Encounter running away from Lawmen. Marston can either shoot him or save him by shooting the pursuing Lawmen.

Gallaway can also be the leader of the unaffiliated criminals during the random encounter "fate of the stagecoach". The player may choose to help him and his gang rob the stagecoach or save it. 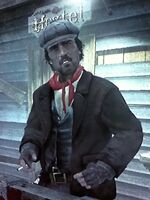 Gallaway watches the Marshal and his posse approach Tumbleweed during "Hanging Bonnie MacFarlane".
Add a photo to this gallery
Retrieved from "https://reddead.fandom.com/wiki/Kent_Gallaway?oldid=391591"
Community content is available under CC-BY-SA unless otherwise noted.