Duffy is soft-spoken and nervous, often stuttering when he speaks. He generally has a kind-hearted demeanor and avoids conflict when he can, as seen, for example, when he agrees to drink with Bill Williamson even after being physically threatened by him so often. When he tells Sean MacGuire his life story of being orphaned and falling in with the O'Driscolls, he says that all he's ever known is "folks all seem to die", reflecting that he may be wary of losing friends and loved ones so often and never having a solid home or family. 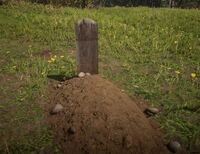