The Lancaster Repeater is a well-rounded gun that uses a fast lever-action system to load the next cartridge. It has the lowest damage of all repeating rifles, but the quick firing rate and high accuracy give it the advantage. This gun has an ammo capacity of fourteen rounds, and can use Regular, High Velocity, Split Point, Express and Explosive repeater ammo.[1]

This rifle is available from all gunsmiths. It is also provided during the mission "An American Pastoral Scene". The Lancaster Repeater can also be found in a weapon case in the basement of the gunsmith in Rhodes, by robbing the basement after seeing a kidnapped young man through the basement window near the right side of the store.

In Red Dead Online, the Lancaster Repeater can be purchased at any gunsmith.

Shown in the Wheeler, Rawson and Co. Catalog 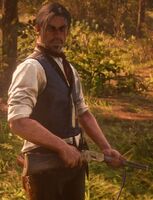 Javier Escuella holding a Lancaster Repeater while on guard duty 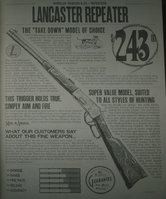