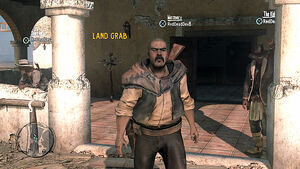 Land Grab is where players fight for control over a section of land in one of seven different towns in the Red Dead Redemption online game world. To initiate a Land Grab game, visit any one of the seven distinct areas and find the post that says Land Grab:

Once the post is activated, a 3 minute countdown will begin and the player will be given control over a radius of territory, displayed on the in-game map. In order to lay claim to the land, the player must remain inside the predetermined radius, and defend against any oncoming enemies. Leaving at any time will surrender your claim, as will being killed by another player.

Players can also lose control of their turf if another player is able to sneak into the area and activate the post again, therefore giving them command of the territory. While the land grab is active, players add to the XP pot awarded at the conclusion of the match by taking down other players. Posses are also supported in this new mode, allowing you to work together to protect the claim. Additionally, anytime a member of the land owner's posse is killed, a defender kill XP bonus is added to the pot.

A minimum of 3 people must be in a session to start a Land Grab, and this mode is only available in Normal and Hardcore Free Roam modes. Although all players can participate in an active Land Grab, only players that have the Undead Nightmare DLC pack can initiate a game. Unlike all other competitive multiplayer game modes, Land Grab actually takes place within the Free Roam session rather than in a separate session dedicated to the game mode. This means that players will not be randomly added to the game in progress as in the other modes (though players joining the Free Roam session can of course participate in the Land Grab if desired).

The following Trophies/Achievements can be acquired while playing Land Grab mode:

Retrieved from "https://reddead.fandom.com/wiki/Land_Grab?oldid=389220"
Community content is available under CC-BY-SA unless otherwise noted.