With the addition of the Undead Nightmare DLC pack, an undead version of him, known as Zombie Ricketts, is a multiplayer character model that may be selected in the "Zombies" section of the Outfitter.

With the addition of the Myths and Mavericks DLC pack, Landon Ricketts is also a multiplayer character model that may be selected in the "Revolution" section of the Outfitter.

Landon Ricketts was a renowned gunslinger during the height of the American West, and stories of his adventures and fights were commonplace during John Marston's childhood. He was purportedly involved in many gunfights, including one wherein he killed the Butcher Brothers in 1896. He was also rumored to have been involved in the infamous Blackwater Massacre of 1899.

The massacre was allegedly part of the reason Ricketts chose to move to Chuparosa, sometime after a gunfight in eastern California in 1902, for a more "quiet" lifestyle. As an experienced gunman, he functions as an unofficial lawman or vigilante for the town. Ricketts was also married, though his wife died at some point prior to 1911 from unknown causes.

John first meets Ricketts in Chuparosa after Ricketts witnesses Marston killing three bandits who try to rob him. He gives him a Schofield Revolver to replace his less powerful Cattleman Revolver and then teaches him the third level of Dead Eye by targeting glass bottles followed by shooting numerous birds in mid-flight. Marston then displays his newly taught skills by accompanying Ricketts in retrieving a wagon stolen from the bank by bandits and by rescuing a hostage.

Marston meets Landon Ricketts later discussing with Emilio Fortuna and his companion about the whereabouts of Javier Escuella, although they are not certain if the Escuella they are talking about is Javier or not. Marston and Ricketts then go on a mission to retrieve Emilio's sister, Luisa Fortuna, from the government jail. They are able to get past the guards with the help of Carlos, a butcher in El Matadero, who distracts them so Marston and Ricketts can enter. The pair of gunslingers shoot their way towards Luisa's cell. Ricketts rigs the locked door with Dynamite while Marston keeps watch. The two find Luisa barely alive in her cell, after which Ricketts carries Luisa as he and Marston shoot their way out. They escape on horseback only to be pursued by more Mexican soldiers which are quickly eliminated. They then regroup with Carlos who takes Luisa for medical attention.

Marston meets Ricketts again at the bar in Chuparosa where he is playing Poker with Andreas Müller, a German silver prospector and two other Mexican men, Manolo Santander and The Stranger. Ricketts invites Marston to join them. After a couple of hands, Müller accuses Marston of cheating, which he denies. Angry, Müller draws his gun, prompting the others to do likewise, resulting in an impasse. Müller subsequently challenges Marston to a Duel outside, which he accepts. While walking to the Duelling point, Ricketts gives Marston a few tips. Marston successfully kills Müller and then shares a drink with Ricketts using Müller's money. A few moments later, they are interrupted by The Stranger, who holds a knife to a girl's throat. He challenges John to a duel, and Marston manages to shoot The Stranger in the head, killing him without harming the girl. Four accomplices arrive who start shooting at Ricketts and Marston; the two of them prevail and part ways.

The two meet once again in the bar in Chuparosa, where Marston asks him if he has any further information on Javier Escuella but Ricketts has none. Marston tells him his history of the gang he used to run in, they share a few drinks as they discuss their lives. Luisa enters the bar pleading for their help as innocent people are being sentenced to death on Colonel Allende's orders without trial. Ricketts and Marston ride out to ambush the convoy of wagons holding the prisoners. The pair have a heated discussion about Marston's recent activity, shortly before they each take control of a wagon, killing the Mexican soldiers who try stopping them. They reach the borderline to America where they are safe from the army and the prisoners are released. With Marston needing to return to finding Javier Escuella, he and Ricketts say their final farewells.

In the final 1914 issue of the Blackwater Ledger, it is revealed that Landon Ricketts passed away quietly in his sleep, a week before the events of "Remember My Family". The paper says that he had returned to the United States in 1911 (presumably after rescuing the hostages in "The Mexican Wagon Train") after living for many years in Mexico. The paper also stated that with his passing, another piece of the Old West was lost.

Ricketts is now living in Casa Madrugada, apparently single-handedly defending the town from the Undead hordes, making it a permanent safe zone. He will ask Marston to get some Undead Bait and some Dynamite for him, which he combines to make Boom Bait, which lures zombies over, then explodes.

Landon Ricketts can be killed in the Undead Nightmare DLC. After completion of his mission in Casa Madrugada, Ricketts is sitting on a chair. If the player shoots a bottle near him or shoots off his hat, he will attack. Then the player can kill him, and the story won't be affected at all, and Casa Madrugada will remain safe. Like Amos in the main game, he can survive a shot to the face with a Cattleman Revolver.

In addition, Ricketts returns as an Undead. Ricketts uses the same model in Multiplayer minus his hat and behaves as a Bolter Undead would. He has a 1/4th chance appearing alongside zombies in regular hordes and can spawn anywhere in the game world at any given time. This can happen even before he appears alive in "Biographies and Lies". 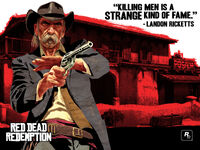 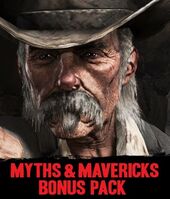 Ricketts on a promotional art for Myths and Mavericks. 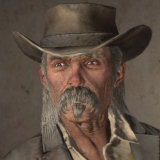 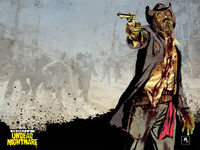 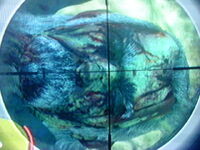 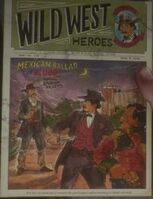