Landon tells John that Emilio Fortuna knows of an Escuella, but is not sure if it is Javier Escuella. After a brief conversation, they find that Emilio's sister, Luisa Fortuna, is being sought by Colonel Agustin Allende, during which Landon and John get into a heated argument about the paths each other have taken. John either rides with Landon in the train, or rides his own horse to Casa Madrugada, then on to El Matadero to find a butcher named Carlos who can help them. After meeting with Carlos, he leads them to the caves where Luisa is being held. After killing some two dozen men, John and Landon use dynamite to blow the door to Luisa's cell. The pair then has to escort Luisa to Diez Coronas so that Carlos can take her for medical treatment, but not before the duo takes out more members of the Mexican army.

After Carlos leads the two guards away, enter the cave and kill everyone you see, making your way back to Luisa's cell. Once there, you will have to defend Ricketts while he sets a dynamite charge on the door. There will be two pairs of guards before the cutscene showing Ricketts laying the dynamite.

You must then defend Ricketts as he carries Luisa's unconscious body out of the cave. There are some half-dozen guards you'll have to wade through. When you reach the cave entrance, Carlos has left you some horses and you and Ricketts will ride out of the canyon. Along the path more Mexicans will appear that you'll have to deal with. At the end of the short trail, you will be met by Carlos on horseback and a cutscene will play, ending the mission.

"Mr. Marston. How the devil are you?"

Ricketts: "I'm glad you're here because these men were just telling me about Mr. Escuella."

Marston: "I got that bit. Ask him, was he about five foot eight, mustache, did he have an American in tow? A big American?"

Ricketts: "But they have his sister. Emilio's, I mean."

"She's a fine young woman, teacher, a human being. Not the clothed vermin so many people seem to have turned into."

"When a man's family is involved, you need a little more enthusiasm than mere apologies."

"I have enough worries, sir. This man's problems pain me, but they're not quite my own."

"Those who sit on the fence make a choice... in their own way. Don't you think, Mr. Marston?"

"Of course. And what about you, Ricketts? A man living in the past, a man who ran away from home, what choice did you make?"

Ricketts: "I think we should get going."

Ricketts: "It's the only way to travel, so they keep telling me. We'll get off at Casa Madrugada and ride from there."

Ricketts: "We're here for Luisa. Is she still being held up in the caves?"
Carlos: "Who's the cowboy?"
Marston: "We're here to help."

"Muy bien. I'll distract the guards. You and the gringo can get inside."

"Get behind the table, I'm gonna blow it!"

"There he is! Talk about cutting it fine."

Luisa: "Thank you for saving me."
Ricketts: "Was someone named Javier Escuella one of the men holding you?"

Luisa: "No... I don't know. I don't think so. But I remember the name from prison. Bad people spoke of him."

Ricketts: "I told you, John, he's still in Mexico."
Marston: "Okay, then, I guess we keep looking." 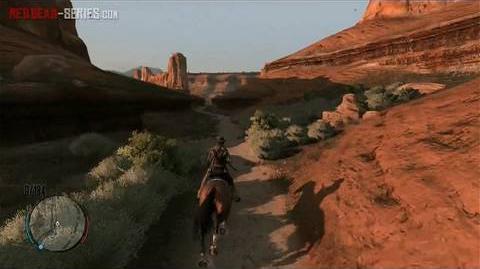 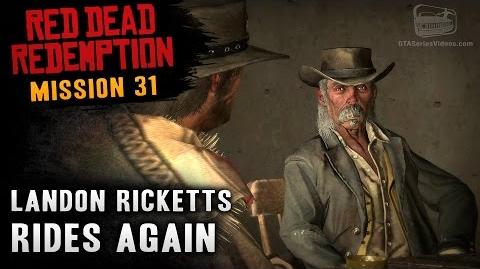 Retrieved from "https://reddead.fandom.com/wiki/Landon_Ricketts_Rides_Again?oldid=417183"
Community content is available under CC-BY-SA unless otherwise noted.