The Laramie gang leader is a minor character featured in Red Dead Redemption 2. He serves as the main antagonist for the first part of the epilogue.

An unidentified outlaw in charge of the West Elizabeth-based Laramie Gang, he and his gang became associated with a wealthy landowner named, Abel Atherton by 1907. Atherton hired the Laramie gang and its leader to intimidate David Geddes, the owner of Pronghorn Ranch, into selling the farm to the landowner.

He and two other gang members arrive at Pronghorn Ranch, where they are seen harassing Abe. He tells Abe to convince his boss to sell the land, threatening to start killing people on the ranch otherwise. He then fires his revolver near to Abe's feet to scare him, saying that he’ll be the first to be killed. John Marston intervenes, and the gang leader insults him. John calls his gang “vermin”, angering the gang leader. He then punches at John, who dodges, starting a fight. John defeats the gang leader and continues beating him up, until Abigail intervenes and tells John to stop. The gang leader threatens to return to the ranch and leaves with the two gang members.

A few days later, the Laramies attack the ranch in the middle of the night. They kill a ranch worker, set fire to the stables, and set the cattle loose. Geddes asks John, Abe, and Dickens to help him get back his cattle. The group heads to Hanging Dog Ranch, where the Laramies were holed up. John, Abe, and Tom attack the hideout and successfully recover the cattle. John finds the Laramie Leader in the ranch's barn, where the two get into a fistfight. The leader grabs a Sawed-off Shotgun to shoot at John, but John kicks the gun out of his hand and knocks him to the floor. The Laramie leader taunts John one final time before John kills him with his own shotgun.

The leader of the Laramie gang is shown to be very cruel and has little regard for the lives of others as long as it lines his pockets. He also appears to be attracted to Abigail, as his last words involve wanting to sleep with her. However, considering his animosity towards John, it's possible he was merely taunting him. 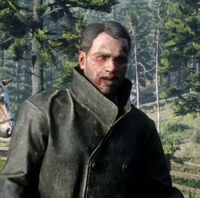