The lasso is a loop of rope that is designed to be thrown around a target and tightened when pulled. It is used for catching and taming wild horses, for lassoing people and to hogtie criminals to take them to jail for a bounty reward. The player can also lasso criminals around the waist or feet and drag them while riding a horse. The player is unable to use the lasso while on a train.

To use the lasso, players must aim and 'fire' it, like any other weapon, though there is an important distinction: the player must continue to hold the aim button, otherwise, the target will be released. At this point, the player may hogtie their enemy. Players should note that aiming the lasso above the target extends the lasso range further than the auto-aim targeting allows.

Pressing the fire button while still holding the aim button to keep the lasso extended allows the player to reel in the rope, dragging the victim towards them. When trying to break horses, this can cause the horse to rear up, giving the player a few seconds to run up and mount it. It can also be used in herding cattle, when having trouble getting the cattle through the gates.

In Redemption 2, the player has to calm the horse before they are able to mount or pat it. 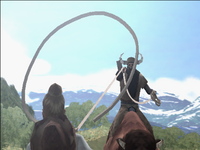 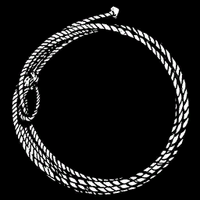 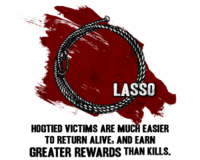 Description of the Lasso

John Marston breaking a horse in

A hogtied outlaw without their hat 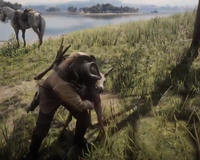 Arthur killing a Deer with the help of the lasso 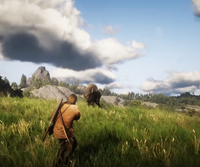