The LeMat Revolver is a weapon featured in Red Dead Online and Red Dead Redemption 2.

The LeMat is a cap and ball revolver with a single-shot, smooth bore barrel of buckshot beneath the main barrel, allowing players to switch between revolver and shotgun ammunition at their leisure.

The LeMat revolver is a very powerful but very slow-acting gun; with Revolver Ammo, it possesses the highest damage of all in-game revolvers, with its damage and accuracy being both marginally better than the Schofield Revolver and Volcanic Pistol and decisively superior to that of both the Double-action and Cattleman revolvers. With Express Ammo, this becomes even more exaggerated, with the LeMat revolver's damage now being comparable to some of the weaker rifles. However, as a downside, both its rate of fire and reload speed are the slowest of all in-game revolvers, although the latter factor is somewhat mitigated in that the ammo capacity is nine rounds as opposed to the default six.

With Shotgun Ammo, the LeMat performs similarly to the Sawed-off Shotgun, except it has one round available instead of two.

In Red Dead Redemption 2, the LeMat Revolver can be purchased from the gunsmith in Saint Denis after the mission "The Gilded Cage".

In Online, the revolver can also be purchased from any gunsmith or from the handheld catalogue that the Online protagonist carries on-hand. 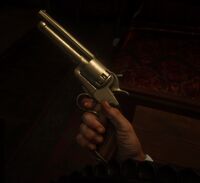 The player holding an engraved LeMat

Shown in the Wheeler Rawson and Co. Catalogue

Introducing the paper cartridge into the LeMat cylinder

Using the lever to press the cartridge into the chamber

Due to the bugged animation, it is possible to see the paper cartridge in detail

Marston firing a LeMat. The greater amount of sparks and smoke around the cylinder of the revolver is a realistic depiction of a black powder paper cartridge with a percussion cap