Town of Armadillo in Cholla Springs, State of New Austin

With the addition of the Liars and Cheats DLC pack, Marshal Johnson is also a multiplayer character model that may be selected in the 'Redemption' section of the Outfitter.

Leigh Johnson was born circa 1860.[1] In 1897, Johnson became the district Marshal of Armadillo, a settlement in the territory of New Austin. Due to a cholera epidemic afflicting Armadillo in 1907, Marshal Johnson was temporarily absent, along with most of the town's residents. Despite his work and contributions to keep Armadillo from becoming "a living hell", he receives little to no appreciation from the residents, even being rumored to involved such acts as corruption, among other things. The Marshal also commands a couple of loyal deputies, Jonah and Eli, as well as an unnamed deputy featured in "The Assault on Fort Mercer".

Marston first comes to meet Marshal Johnson in Armadillo after he has arrived looking for help on where to find Bill Williamson. He tasks Marston with numerous missions throughout New Austin, for which in return he will help in the attempt to capture John's former-brother-in-arms at Fort Mercer.

Marshal Johnson's first mission with John involves them tracking down Walton Lowe, the leader of Walton's gang. They track him down to Pleasance House, and Walton is either killed by Marston, or injured by him, where Johnson will bring him back to Armadillo jail. Soon afterwards, John rides out with the Marshal to Pike's Basin, to deal with the Bollard Twins gang, who are cattle rustlers in the region. Along with Jonah and Eli, Marston and Johnson manage to eliminate the cattle rustlers and retrieve the stolen cattle, where the ranchers are grateful.

A short while later, the Marshal hears about a horrific attack on Ridgewood Farm by Bill Williamson's gang. In the hope of finding Williamson, John rides with the Marshal and two of his deputies. On the way to Ridgewood Farm, and at the place itself, they see dead bodies, many of whom were the victims of sadism. They are attacked by gang members from the central house, leading to a gunfight. They save a number of the residents, before going after other members of the gang. They find Williamson, who sends his men after them and, after another shootout, the Marshal and his accomplices manage to capture Norman Deek, Williamson's second in command, and bring him back to Armadillo jail.

Soon afterwards, a member of the Williamson gang calls out to the Marshal from outside the office. He tells Johnson that his gang have kidnapped Bonnie MacFarlane, and will give her back in exchange for Norman Deek, which is to take place in Tumbleweed. The Marshal, John and two deputies, Jonah and Eli, ride out to Tumbleweed for the exchange. As Marshal Johnson expected, it turns out to be a trap, and Bonnie is hanged, although she is saved by John just in time. Meanwhile, Norman Deek is slain by his own gang and, after clearing out the area from the gang, Marshal Johnson takes Bonnie back to Armadillo.

When Marston returns to Fort Mercer later on, the Marshal and his deputies, alongside a number of other characters Marston has befriended, come along to help apprehend Williamson. After storming the fort, they learn that Williamson left a few days prior to the attack, and that he travelled south across the border and into Nuevo Paraíso, Mexico, with the help of Javier Escuella. Johnson and Marston thank each other for their assistance in their own matters, and part ways as Marston heads after Williamson.

In 1914, according to The Blackwater Ledger, it is stated that the "Legendary Marshal Leigh Johnson" stepped down as Marshal of Armadillo after 17 years of service. When asked what his next move would be, he stated that he plans to move as far away from Armadillo as possible.

In the Undead Nightmare DLC, Marshal Johnson is in the Sheriff's office in Armadillo. When Marston enters the office, Johnson explains the situation of the town. He asks Marston to look for his deputies, whom he sent out into the town. When Marston returns with the news of their demise, Johnson accepts it. He gives Jonah's Sawed-off Shotgun to Marston and is not seen again.

Johnson is an old-fashioned lawman with a strict no-nonsense work ethic. He is characterized as tough, straight to the point, and is not afraid to get aggressive, all while remaining fair to the law. Johnson isn't afraid to get his hands dirty, often fighting alongside his men and Marston, and is clearly a skilled shootist. Johnson does his best to maintain law and order in the town of Armadillo and the county of Cholla Springs, while the world around them progresses into the modern age. Leigh holds a grudge against government agents from the east meddling in his affairs. Despite this, he shows respect for John and assists him in ridding New Austin of Bill and his gang.

Leigh Johnson bears the appearance of a middle-aged man with a beard and gray hair, wearing a well-kept marshal uniform. His beard appears to have a slight yellow tinge. This may be due to streaks of blond in his hair, or it may be caused by consumption of alcohol or chewing tobacco, similar to Uncle. 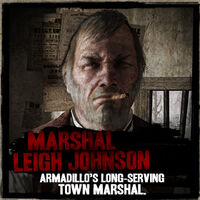 The Marshal with John Marston. 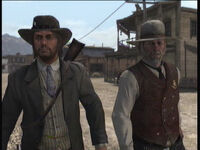 John with the Marshal in Armadillo.

Marshal Johnson taking cover before gunning down an outlaw.

Retrieved from "https://reddead.fandom.com/wiki/Leigh_Johnson?oldid=395226"
Community content is available under CC-BY-SA unless otherwise noted.