Lemoyne is a southern American state and one of the five American States in Red Dead Redemption 2 and Red Dead Online and the smallest state in size.

It is also home to the most civilized settlement in the state, Saint Denis.

Lemoyne has three smaller regions: Scarlett Meadows, Bayou Nwa, and Bluewater Marsh. A prison island called the Sisika Penitentiary is located not far off from the state. Lemoyne is bordered by New Hanover to the north and the Flat Iron Lake to the west and Lannahechee River to the east and south.

The state is the most populated out of the other four states, despite the fact that is the smallest in size. It is mostly characterized by the massive crawl of industrialization and unique biomes. The state's capital, the former French colony of Saint Denis, is located on the eastern shore of the state. Factories and orchards litter the wet swamplands of Bayou Nwa; plantations, farmland, and the town of Rhodes can be found by Scarlett Meadows to the west; and the north-eastern region of Bluewater Marsh is relatively uninhabited due to its damp and muddy terrain. Notable plantations in Lemoyne are Caliga Hall and Braithwaite Manor, belonging to the feuding Gray and Braithwaite families, respectively. By the 1890s, the metropolis of Saint Denis, as well as another major settlement in Rhodes boost its numbers and its favourable geographic position and relatively hospitable conditions allow the state to flourish.

In the past, Lemoyne was a member of the short-lived Confederate States of America during the Civil War (1861-1865), with many citizens of the state fighting against the North. Remnants of Civil War battlefields can be found deep within the meadows of the state. Lemoyne is also the base of the ex-Confederate militia movement called the Lemoyne Raiders, who are still bitter from the Civil War and are excessively patriotic of Lemoyne's former past.

The western portion of Lemoyne consists of lush rolling hills, red-earth soil, pastures, and ponds that make up Scarlett Meadows. Dewberry Creek, a dried creek, is found within the borders of the meadows. Low-level shrubs and short grass primarily grow in the region, which is suitable for grazing and ranching.

The eastern part of the state (Bayou Nwa and Bluewater Marsh) consists of mostly marshes, floodplains, and swampland, where the American alligator and various semi-exotic creatures are found. Kamassa River feeds the bayous of the territory, where stagnant water rests before emptying to Lannahechee River. Hardwood trees abundantly grow within the nutrient-rich swampland of Bayou Nwa.

Lemoyne is directly based on the state of Louisiana, the two even sharing similar names. Being a giant forest-like marshland near the Gulf of Mexico, both Lemoyne and Louisiana have major metropolitan areas (Saint Denis and New Orleans, respectively) as well as French/African-American heritage and a Confederate Civil War history.

After the Van der Linde gang's actions in the Heartlands of New Hanover, they are forced to relocate down south to avoid any further attention. Arthur and Charles then travel to find a suitable campsite and at first, considering Dewberry Creek, which proved to be too open, but after helping a German family, they find a suitable hidden area located deep in a forest called Clemens Point, southwest of Clemens Cove. The gang also gets involved in the ancient families called the Grays and the Braithwaites. They planned to trick and rob both of them, but unfortunately, this fails and it costs gang member Sean MacGuire's life after a shootout in Rhodes, leading to the deaths of several Grays and Braithwaites as well as the matriarch of the latter, Catherine Braithwaite, after they kidnapped Jack Marston.

After dealing with both families, they are forced to relocate at an old plantation house called Shady Belle, in the swamplands of Bayou Nwa after the Pinkertons found them at Clemens Point. From there, they search Saint Denis for Jack as according to Catherine, she said that a man named Angelo Bronte has him. After searching around town, they are told the location of his mansion in the western section of the city. After doing small work for Bronte, they manage to get Jack back. The gang then prepares to make several big scores before they leave the country for good. Arthur helps Josiah Trelawny, Javier Escuella, and Leopold Strauss also robs a high-stakes poker game onboard a gambling steam boat called the Grand Korrigan on the Lannahechee River, which they barely succeed after a shootout. But as they are told by Bronte about a train station that has a large amount of money at a party at the Mayor’s mansion, Arthur, Dutch van der Linde, and Lenny Summers rob the station but they find out that they were lied to, and are forced to fight their way out of the city against the police force. Eventually, Dutch decides to get revenge against Bronte and leads his gang to his mansion after helping a villager at Lagras in exchange for a boat. After arriving, the gang assaults the mansion and kidnaps Bronte after killing all of his henchmen in his mansion. After barely escaping the law on their boat, the gang arrives back at Shady Belle and Dutch murders Bronte out of anger. After this, the gang robs the Lemoyne National Bank, but it goes horribly wrong as the Pinkertons had caught onto their plans. One of them, Andrew Milton, murders one of the captured members, Hosea Matthews, and the rest of the robbery is foiled, forcing the gang to flee via the rooftops. Unfortunately, Lenny is gunned down by two Pinkertons on the rooftops, but the rest of the gang barely escape alive. They eventually hide in an old building and wait until dark, where they make their escape on a boat at the docks.

The gang returns to America after being lost at sea and stranded on Guarma, a sugar plantation island off the coast of Cuba. Arthur arrives up north in Van Horn, New Hanover, but travels back to Shady Belle, only to discover the gang is gone, but Arthur finds a note from Sadie Adler, telling him to meet the gang at Lakay, a small fishing village north of Saint Denis. Arthur makes his way there and the rest of the gang are reunited; unfortunately, the Pinkertons eventually find them and assault them, but the members survive. They then realize that they need to make an escape up north. After Arthur and Charles clear out Beaver Hollow, a cave in Roanoke Ridge, the gang leaves Lakay and the territory altogether.

The territory is revisited a few times. Arthur, Dutch, and Sadie go to Saint Denis to ensure that Colm O'Driscoll gets hanged after he got arrested. They succeed in their objectives but after Sadie goes into blind rage over her husband's death and ends up killing some of Colm's men, Dutch and Sadie are forced to partake in a shootout while Arthur provides covering fire. Dutch and Sadie escapes while Arthur leaves the scene.

The territory is visited at least one last time by the gang as they prepare for a train robbery that was supposed to stop at the train station in Saint Denis, but sped past it. The train continues through and out of the territory. Sometime after the robbery and the gang's downfall, Tilly Jackson takes Jack to go hide at Copperhead Landing in Bluewater Marsh, where they await until things cool down. Abigail Marston and Sadie join up with them soon after. After the help and sacrifice of Arthur, John escapes and makes it to Copperhead Landing to reunite with his family.

Eight years later, after the downfall of the gang, John and Sadie deliver a bounty named Ramón Cortez to Rhodes, but unfortunately, they lose him after a breakout. They recapture him at the Old Greenbank Mill and Ramón is sent to Saint Denis to hang.

John and Uncle also visit the territory once again as they go to Saint Denis after finding out Charles is alive. After rescuing him and escaping the city after a shootout against Guido Martelli's men, John, Uncle, and Charles go back to John's ranch at Beecher's Hope in West Elizabeth. After this, John never revisits the area after the main story missions.

In the end credits scene, Simon Pearson is seen at his shop in Rhodes viewing an old photo of the Van der Linde gang, Tilly Jackson is seen walking with her husband in Saint Denis, and BOI Agents Edgar Ross and Archer Fordham interrogate some passers-by in Scarlett Meadows as they are searching for the murderers of Micah Bell after John, Sadie, and Charles killed him up in the mountains of Ambarino. 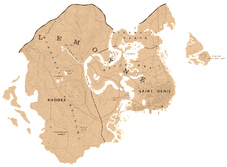 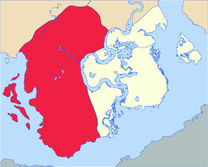 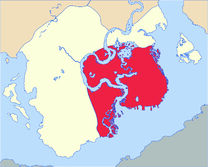 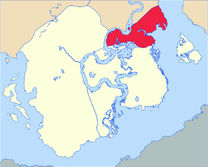 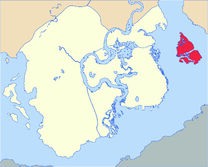 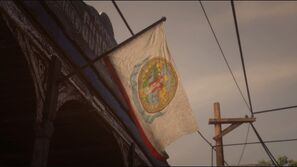 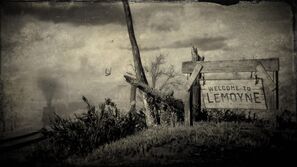