Lenny Summers was born circa 1880. Both of his parents were former slaves. His family's life had been hard even before he was born; his mother was born in a cotton field and immediately confiscated by the overseer from her own mother. When the Civil War ended, the overseer continued harassing Lenny's grandmother, who eventually killed him with a knife and subsequently fled, narrowly avoiding a lynching.[2] The girl never saw her mother again, but she eventually met and married Mr. Summers, who would become Lenny's father.

Mr. Summers was an educated man who could read and write; he taught Lenny everything he knew, and also gave him a pocket watch that was previously given to him by his former owner. One night, his father was beaten to death by a few drunk men, whom Lenny killed in revenge. He was forced to go on the run afterward, being only 15 years old at the time, and eventually joined the Van der Linde gang while traversing the Grizzlies in late 1898.[3]

It is known that Lenny fell in love with Jenny Kirk sometime before her death, and her loss hit him hard. Unfortunately, Lenny also lost the pocket watch his father gave him, during the chaos of the failed ferry robbery in Blackwater.

Lenny takes part in the assault of the O'Driscoll camp in which he is paired up with Javier Escuella, although he first takes the spotlight when the gang is robbing the Cornwall Company Train. Before the robbery, Dutch praises Lenny for his eagerness and readiness.

After the explosives which were intended to bring the train down failed to activate, Lenny, Javier, and Arthur chase after the train and jump aboard. Although Javier falls off, Arthur and Lenny succeed and the two fight their way across the train. The two manage to eliminate most of the train guards themselves, before Dutch and the others arrive and neutralize the remaining few. Subsequently, Arthur, Lenny, and Micah are sent inside to loot the private car, and Lenny is praised by the gang for his actions.

When the gang leaves the mountains, Lenny and Micah are sent scouting ahead and end up in the town of Strawberry. Shortly afterward, Micah is arrested and sentenced to be hanged for murdering two O'Driscolls in a bar fight; after barely escaping with his life, Lenny runs back to report to the gang.

Dutch instructs Arthur to take Lenny to Smithfield's Saloon to calm his nerves, where the two end up highly intoxicated. They are later pursued by the deputies in the town for an account of drunken violence. Lenny is immediately caught by the deputies, while Arthur is given an opportunity to escape. If Arthur fails to evade the deputies, he and Lenny will be placed in a jail cell. The next morning, Lenny secures their release by paying their bail to a deputy and returns to camp while Arthur remains in Valentine.

After wandering around in the town of Rhodes and speaking to the black community there, he learns of a group of ex-confederates known as the Lemoyne Raiders. He learns that this gang is camped in an old plantation house named Shady Belle, and have many expensive weapons which they are selling to other countries. He convinces Arthur to go with him, and the two assault Shady Belle. After killing the Lemoyne Raiders occupying the plantation, they take the stash of weapons and ride off. The pair are ambushed after fleeing the place, but they fight off their attackers and bring the weapons back to camp.

Soon afterward, Bill approaches Lenny and Arthur, along with Karen, to rob the bank in Valentine. The robbery is successful and, although Lawmen begin to close in, the four gang members manage to fight their way out and escape the law, taking with them several thousand dollars. Lenny later takes part in the assault against the Braithwaite Manor.

Lenny is the driver of the stagecoach that Arthur, Dutch, Hosea, and Bill travel in when they attend the party at Mayor Lemieux's residence. When the four leave the party, Lenny drives them back to camp in the stagecoach.

Following a tip given to Dutch by Angelo Bronte at the party, Lenny, Arthur, and Dutch rob the Saint Denis trolley station. However, the tip proves to be a setup, as the station's vault contained only ninety dollars. Numerous officers from the Saint Denis Police Department then descend upon their position, and the trio is forced to shoot their way out of the city. Lenny leads most of the escape and is later praised for his prowess.

Arthur can also rob a stagecoach with Lenny in this chapter. Lenny originally wishes to go alone after finding a lead, but Arthur insists that he should accompany him. The robbery turns out to be a setup, however, although the pair do manage to complete the robbery. At the end of it, Arthur warns Lenny to be careful of leads that come from the stagecoach company, as they are often used as setups.

Lenny is also involved in the assault on Angelo Bronte's mansion, later witnessing the Italian's death. A short while later, during the Saint Denis bank robbery, Lenny is gunned down by two Pinkerton riflemen while leading the gang's escape on the rooftops. After dispatching the Pinkertons, Arthur checks Lenny for signs of life, of which he finds none.

Later on, Sadie mentions that she and the remaining gang managed to get Lenny's body out of Saint Denis by robbing the local morgue, and eventually buried both Lenny and Hosea (who also died during the robbery) together in the Bluewater Marsh.

Lenny is shown to be an intelligent, fun-loving young man. He is also shown to be very competent and effective in many situations, with Hosea and Arthur particularly viewing him as one of the gang's best men. Like most members, he is very loyal to the Van der Linde gang and considers them family. Out of everyone at camp, he appears to be the most educated; this is likely due to his upbringing which, when compared to others in the gang, was more reasonably decent.

He shows a confident and cocky attitude, replying with "’course I’m ready" when Javier asks if he’s ready for the train robbery, and isn’t afraid to get his hands dirty on many occasions. He leads most of the escape during the Saint Denis trolley station robbery and later in the bank robbery, showing his confidence, but this ultimately costs him his life in the latter occasion. When playing Poker and Five Finger Fillet at camp, he playfully teases Arthur about being slow due to his older age.

Despite being part of an ethnic minority, Lenny displays no real care of what others think, perhaps because the gang as a whole live an outcast lifestyle and can all be considered outcasts from society as a result. He sometimes satirically compares himself to common black stereotypes. In a conversation with Sean MacGuire, Lenny states he's uncertain of who to hate more: the slavers who oppressed his ancestors, or the general white populace for antagonizing him because of the recent Emancipation Proclamation.

Lenny has black skin and neat, relatively short black hair, with little in the way of facial hair. Being one of the younger gang members, he is nineteen years old as of 1899, and is seen to be of a fairly slim build, and slightly shorter than Arthur. While committing crimes, he wears a bright orange bandana around his face. He also wears a black duster coat during certain robberies.

Lenny's usual attire consists of a pinstriped, buttoned white shirt over a red union suit and braces, accompanied with black trousers and boots. In Horseshoe Overlook, he normally wears a dark blue vest and a silver jacket on top of this, sometimes with the bandana around his neck. During the gang's stay at Colter, Summers is seen wearing a blue coat with a stripy scarf and grey trousers, accompanied by a brown, wide-brimmed hat.

When at camp, Lenny occasionally wears a grey straight-jacket with a black and white checkered vest underneath. He wears a similar outfit to this during the Saint Denis bank robbery, along with a red tie, black gloves and a black bowler hat with a red band.

Lenny as seen on promotional art for Red Dead Redemption 2

Lenny Summers holds up a hostage in the third trailer 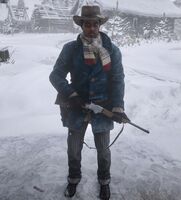 Arthur and Lenny at the bar in "A Quiet Time"

Arthur and Lenny get drunk

Lenny sleeping in his union suit 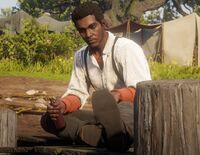 Lenny planning to rob a stagecoach 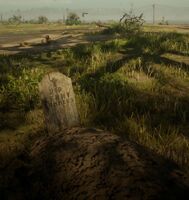 Lenny's letter from his father

Lenny's custom revolver in the holster