Let the Dead Bury Their Dead/dialogues

“Finally, I see the light at the end of this very long, long tunnel. Seth's gonna be rich after all these years...”

–Seth Briars upon finding his "treasure"

Let the Dead Bury Their Dead is the fifteenth mission in Red Dead Redemption.

Marston accompanies Seth to Gaptooth Ridge, where he helps Seth find his "treasure" after first dealing with some armed thugs in and around the mansion and nearby town of Tumbleweed.

Follow Seth through waves of gang members until reaching the mansion. Here there will be close quarter shootouts where the player can easily be killed by the enemies' shotguns. Continue up the stairs and into the next room, take a right and a new cut scene will come on.

"Yeee Hooo! Finally, I see the light at the end of this very long, long tunnel. Seth's gonna be rich after all these years..."

"It's silk sheets and Parisian whores from now on, mister!"

"What the goddamn hell is this? A glass eye?"

"I'm sure whoever that belonged to treasured it very much."

"Stupid liars...with their stupid chicken-shit maps! Making a damn fool of me."

"Stop with the tears and help me with Williamson's gang. Then you can come up with another excuse to go exhume one of your old friends."

"Hunting dead men's treasure ain't done me no favors. Sure. Sure, I'm ready for the living. I'll see you and Mr. West Dickens over at Fort Mercer when you gentlemen is ready."
Add a photo to this gallery 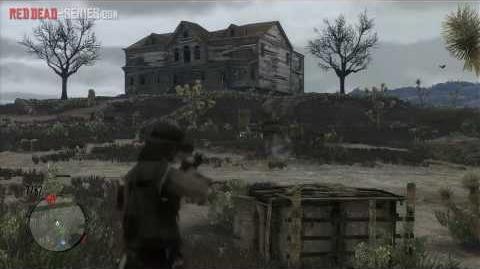 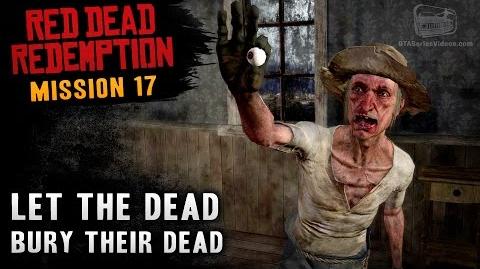 Retrieved from "https://reddead.fandom.com/wiki/Let_the_Dead_Bury_Their_Dead?oldid=355853"
Community content is available under CC-BY-SA unless otherwise noted.