Leviticus Cornwall is a major character and a secondary antagonist featured in Red Dead Redemption 2. He is also mentioned in Red Dead Online.

Leviticus Cornwall is a wealthy man who owns many of the businesses the Van der Linde gang have their sights set on, with his greatest power accumulated in Saint Denis. He is also a financial backer of the Pinkerton National Detective Agency.

At some point, he gave Colonel Henry Favours of the United States Army a proposition to drive the Wapiti Indians off the reservation's lands, which are allegedly oil-rich. To do so, he made a deal with the state offering to "modernize" it, for which he was given a vast amount of state bonds. In doing so, Cornwall undermined the authority of the federal government, who did not want conflict with the Indians.

Leviticus Cornwall also built up connections with the ruler of Guarma, Alberto Fussar. Due to the sugar plantations on the island, Cornwall had close business ties with Fussar, with Cornwall reportedly describing him as a "great friend to America" in spite of his controversial reputation.[1]

At some point prior to 1899, he destroyed or sabotaged the Oil Derrick in The Heartlands. There, a corpse can be looted to find a letter from Cornwall Kerosene & Tar addressed to a Mr. Varley. The letter makes several offers to buy the derrick to reduce competition in the oil market. Given the state of the structure and what is likely Varley's corpse, it is assumed Cornwall decided to sabotage the derrick and have Varley killed.

Leviticus Cornwall is first mentioned by the gang after they attack an O'Driscoll camp near Colter. The gang discovers information about a Cornwall train that the O'Driscolls intended to rob and decide to do it in their stead. The gang decides to rob the train soon afterward, and they seize a significant amount of money in bonds. However, Leviticus Cornwall catches wind of this and begins funding the Pinkerton National Detective Agency, commissioning them to bring down the Van der Linde gang.

Cornwall manages to track down the Van der Linde gang in Valentine. In retaliation for the robbery, he has his private guards hold Strauss and John as hostages. He then demands that Dutch comes outside before his men are killed, and leaves immediately afterward, telling his private guards to deal with the situation.

During Mayor Lemieux’s party, Cornwall angrily telephones the mayor’s residence to demand that the mayor sign some papers. Lemieux‘s butler, Pierre, informs him about the call during the party. Dutch overhears this conversation and asks Arthur to follow the servant. Pierre heads to mayor's office and locks a drawer which contains mayor’s ledger - and documents that Cornwall wants the mayor to sign. After Pierre leaves, Arthur sneaks into the office and steals the documents.

Insisting it’s just for a "simple social call", Dutch decides to confront Cornwall personally and brings Micah and Arthur along to wait for him to sail into Annesburg. Cornwall has a brief meeting with the Pinkerton agents Milton and Ross, where he scolds them for their lack of progress, claiming Dutch is still out there "laughing at him", and also threatens to pull his funding. The pair soon leave, before Cornwall begins berating a union leader for the miners about the wage strike.

Dutch then suddenly steps in and demands $10,000, Cornwall's boat, and safe passage in return for sparing his life. Cornwall refuses, and Dutch kills him; Cornwall gets shot in the chest and promptly falls into the water, initiating a large shootout with Cornwall's private guards against Arthur and Dutch.

Despite his death, Cornwall's presence would still be felt in several plot points. Dutch believed Cornwall to be the sole reason why the Pinkertons were pursuing them, as he was one of their funders, and that his death would weaken them. However, it instead only made them even more aggressive. Colonel Favours continued oppressing the Wapiti Indians despite Cornwall's death, and Eagle Flies led a revolt, which would lead to his death and the Indians abandoning Wapiti. Ironically, this is what Cornwall had wanted in the first place, and his death neither stopped the Pinkertons' pursuit of the gang nor saved the Wapiti Indians. Newspaper articles report on Cornwall's death, something previously seen as inconceivable given his wealth, power, and high profile. Additionally, many NPCs will mention his demise in small talk.

A newspaper article written in 1907 reveals that Cornwall Kerosene & Tar continued to operate despite Leviticus' death. After the Wapiti Indians had fled to Canada by the end of 1899, drilling began on the reservation's land. The amount of oil discovered turned out to be minimal and drilling was quickly halted due to the lack of profits. Ultimately, Cornwall's campaign to drive the Wapiti Indians from their lands was in vain, as years later the settlement is completely abandoned.[2]

A newspaper article also stated that his Southern & Eastern Railway had been bought out by the Pacific Union Railroad.[3]

Leviticus Cornwall is shown to be an irritable and arrogant man. He is greedy and ruthless, using his resources to inflict pain on others in order to extend his control over various businesses and resources. He is also incredibly vindictive towards the Van der Linde gang for consistently robbing and attacking his businesses. During a personal confrontation with Cornwall, Dutch claims that while he is selective of who he kills and robs, Cornwall is indiscriminate and therefore far more destructive. This is exemplified in a conversation with Annesburg miner and union representative Didsbury, in which Cornwall expresses disregard for the safety of his employees in favor of accelerating production by the mining company.

Cornwall has also shown himself to be an unscrupulous businessman who will use any means to achieve his goals, emulating the philosophy and traits of real-life "robber barons" of the 19th century. Several collectible items indicate that Cornwall probably had committed several unethical schemes such as sponsoring Colonel Favours to drive the Wapiti Natives off of their reservation in order to drill their land for oil or sabotaging the oil derrick in The Heartlands (a possible competitor in the oil market). Cornwall even goes as far as to undermine the authority of the federal government for the sake of his goals. It is believed that his constant lawbreaking and indifference towards those he hurts makes him as much of a criminal as the gangs who rob him.

Cornwall is an elderly man with receding gray hair and a beard. True to his status as a business magnate, he is finely dressed in all his appearances. 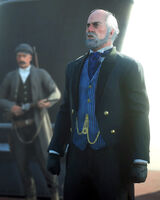 On the deck of his own ship, upset about a recent turn of event 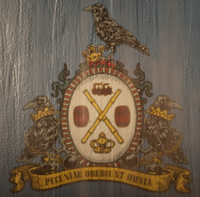