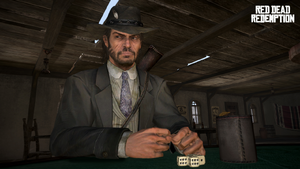 Winning a game of Liar's Dice in Casa Madrugada unlocks one of the scraps for the Bandito Outfit.

It is unlocked by completing the story mission "Man is Born Unto Trouble" for Irish or, alternatively, following a slightly different mission sequence and completing the first part of Nigel West Dickens' mission-strand first.

Liar's Dice is played by two or more players. Each player has one cup and starts with five dice. The game is started by choosing a player who will be the first to "bid." After selecting said player, the first round begins by all players picking up their cup containing five (5) dice, shaking, and slamming the cup upside down onto the table, thus concealing all dice.

At this point, each player may look at their dice and contemplate the mathematical probability of all dice on the table, including their own. The player chosen before the game began then states the opening "bid." An example bid would be "3 fours." The action is then passed clockwise to the player sitting to the left of the starter. The second player may then do one of three things: raise the bid; call a bluff; or declare the bid spot-on.

After a bluff or a spot-on bid is called, all players reveal their dice, and total the number of dice showing the face that was bid on. The round is ended by at least one player discarding one die each. After discarding a die, there is no way to regain it until the game is over and a new one begins. The opening bid of the next round is passed counterclockwise of the player that opened the last round's bidding. To start the next round, all players must put their dice back into their cup, shake, slam and repeat the steps of the typical round as laid out above.

The style of Liar's Dice is free for all elimination. The object of winning is to be the last player with at least one (1) die remaining. Players lose (are eliminated) by discarding all of their dice.

1. Raising the bid: To raise a bid, the current bidder must either declare a higher number of total dice with any face value (for example, 4 twos beats 3 fours), increase the face of the dice last bid on (e.g., 3 fives beats 3 fours), or both. At this point, all players are still concealing their dice, taking turns raising the bid.

First and foremost, it is far easier to win at this game when playing against only one opponent. The dynamics of bid escalation, guesswork, and AI tendencies make it so that your best chance in this game lies in a simple duel. After all, this game involves mathematical probability; it's easier when the table's total dice count is 10 instead of 15. Also, it's easier to read one mind rather than two.

Note that NPCs rarely, if ever, call out a bluff on bids lower than four of anything. For example if you bid that there is at least 3 fives, the NPC(s) will rarely ever call out that bluff. It may be different if facing only one NPC.

The exception is if they don't possess at least one die of the face value you are betting on, even if you're betting there's 2, they will say you are bluffing. This leads to one of the easiest winning strategies, especially for one on one, which is to just tell the truth and bet whatever doubles/triples you have, most of the time they lack a dice of the same value and will call your non-existent bluff, leading to an easy (and reliably repeatable) win. In a game with three players, if they do have a die of the same value, they will raise the bet to a higher value and almost always get called bluffing by the third player, either way resulting in your dice laying untouched.

When bidding, seek out multiple dice with the same number, i.e. three 4s, and bid what you have. If you haven't got any multiples, bid one of your singles. It's often good to bid on your lower dice, to leave headroom for subsequent bids to cover the higher-valued dice (i.e. if you have 1, 2, 4, 5, 6, bid there is one 1 -- if the opponent bids two 2s, because you have a 2 yourself, you can then either call spot-on or raise the bid to three 2s if you think there's another 2 out there).

The best approach is to bid what you have (or one less than what you have) and avoid bluffing -- avoid guessing (or hoping) your opponent has one more of the die you need. Although, sometimes the NPC might surprise you!

NPCs very often call your bluff, not believing you when you say you have two or three or more of a particular die. They may also be forced into an obvious bluff (i.e. you bid three 6s, then they jump the bid to five 6s).

NPCs rarely, if ever, use the Spot On bid, so the player can gain a sizeable advantage by learning to use spot-on properly. It is confirmed that, at least in one-on-one matches, your NPC opponent never uses the spot-on bid!

In summary, because NPCs often call bluffs they shouldn't, and they often make their own obvious bluffs, and they never, at least in one-on-one matches, use spot-on bidding, and their endgame strategy is awful, as they will always say what they actually have as their last die, and so you can either go spot-on if you don't have the same die or if you do raise the number, and then the NPC will raise again, which doesn't make sense so this game can easily be mastered.

During the Stranger side-mission "Lights, Camera, Action", the game's ante amount is set to $200 instead of $20, making it the most profitable opportunity in the game. The ante will remain at $200 until the player leaves Lyle Mouton at the table and saves elsewhere, thereby pushing the mission into its next phase. As long as the player keeps winning, they will get an increase of $200 each game.

After each game during the moment of choosing to ante or quit, the player may adjust one of the game options while still sitting at the table to initiate auto-save. This preserves the player's growing fortune. The player may also stand up, possibly initiate auto-save and sit back down to continue playing, but upon sitting down for a second round, the opponent becomes considerably more difficult.

Auto-saving is only useful as a fail-safe in case the game or system is quit or turned off. Loading the auto-saved file will cause the ante to drop back to $20.

In Multiplayer, a game of Liar's Dice can be launched from markers on the game map or by a playlist selection in the multiplayer menu. The same $200 daily multiplayer gambling allowance is shared between Liar's Dice and Poker. If a player enters a Liar's Dice lobby with insufficient funds to buy into the game, $200 will be added to the player's account (limit of once per day).

Players have a time limit within which to make their bid. If a player exceeds the time limit, a default bid of "one one" is entered.

When a game is finished, the Liar's Dice playlist will take the players to the next location unless the majority choose to replay at the current location. At each location, the buy-in cost and the player's current multiplayer gambling balance are displayed above the table in the lobby.

Two multiplayer challenges under the Gambling category are available for Liar's Dice, with eleven ranks total.

The player can acquire the following Trophies/Achievements while playing Liar's Dice:

Retrieved from "https://reddead.fandom.com/wiki/Liar%27s_Dice?oldid=392636"
Community content is available under CC-BY-SA unless otherwise noted.