The Liars and Cheats Pack is the third downloadable content pack for Red Dead Redemption. It was released on Tuesday, September 21, 2010.

Listed below are all of the playable multiplayer characters that can be unlocked, followed by the category in the Outfitter in which they can be found.

The division of the characters into "Redemption" and "Damnation" categories may indicate Rockstar's views on the path the characters have taken through the story.

Listed below are the 4 new hunting grounds available in the pack, all of which are the locations of a legendary animal:[1][2]

Listed below are 7 new gang hideouts available in the pack:[3]

Getting the high score in one of these Gang Hideouts will reward the player with the Explosive Rifle and 5 Explosive rounds. To gain more ammo one needs to complete another one of these hideouts.

Listed below are the four maps of the new Stronghold Mode: [4]

The Free Roam Pack was intended be a free DLC pack including posse scoring and additional Free Roam challenges. However, due to a restriction on how many pieces of downloadable content a game may give away for free, the Free Roam Pack's contents have been added into the Liars and Cheats Pack.[2]

Playing poker in with the Liars & Cheats pack. 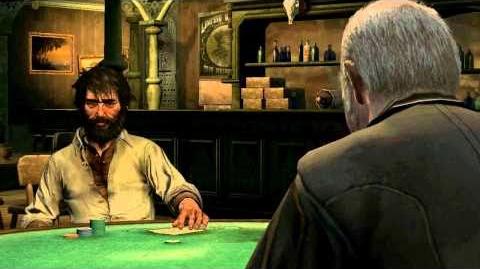