Larouche is one of two performers to survive the change in management. Perry finds him very useful for persuading folks to buy potions.

Larouche is a mini-boss in the level "Freak Show". He appears after the player depletes half of Clyde Slade's health. A cutscene will start up, showing Larouche stepping out of the sheriff's office with a torch. After exclaiming "Who is up for some barbecue?!", he lights the building on fire and charges at the player. When in battle he mainly fires at Jack Swift using a revolver. If Jack gets too close, however, he uses his torch and fire blowing skills to set Jack ablaze. Larouche is immune to all effects of fire, so all attempts of rushing at him while on fire, in an attempt to spread the flames, will be in vain. Unlike Slade, who will avoid Jack and mainly attack Katie, Larouche actively hunts down Jack, searching for him carefully and shooting at him or using the torch attack whenever he spots him, depending on distance. He moves slowly, but if the player rushes him, he will get a boost of speed and run away to cover.

"An unexplained fire kills Prestor O'Leary and Perry steps in."

One of the most amazing practitioners of fire breathing can be seen in O'Leary's Traveling Circus and Carnival Show. Mr. 'Lightning' Larouche thrills the hearts of fans young and old with his mastery of blazing infernos. When asked where he learned his trade, Mr. Larouche replied -cuts off-

Larouche after blowing up the Sheriff's Office. 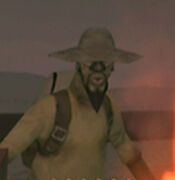 Retrieved from "https://reddead.fandom.com/wiki/Lightning_Larouche?oldid=397424"
Community content is available under CC-BY-SA unless otherwise noted.