Cinema in the Town of Armadillo in Cholla Springs, New Austin

Marston finds MacKenna daydreaming on a bed in a room behind the Cinema in Armadillo.

MacKenna is a boisterous man who talks with his hands and regales Marston with his elaborate aspirations to build a movie studio, and eventually asks for Marston's assistance in this matter.

It's said that Marston could win a land deed by playing Liar's Dice with Lyle Mouton in the saloon at Thieves' Landing. MacKenna then needs Marston to travel to Benedict Point and persuade his lead actor, Silas Spatchcock, to return to the set, and give up his wild dreams. 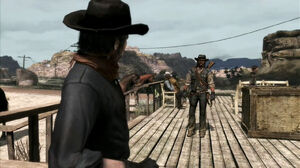 Before this Stranger appears on the world map, the player must complete:

After speaking with McKenna, the player must:

Make your way to Thieves' Landing to play and win a game of Liar's Dice to win the land deed. (The mission will update after you cash out). After acquiring the deed for MacKenna, he asks to put some sense into his lead actor, Spatchcock, who has convinced himself that he is a genuine gunslinger. Head over to Benedict Point to convince Spatchcock that he is not. Once you're finished with Spatchcock, head back to MacKenna in Armadillo for your reward. 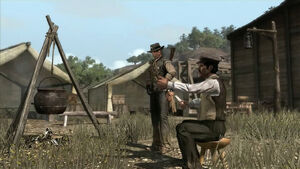 MacKenna later appears later in Red Dead Redemption at Pacific Union R.R Camp to tell you how his theatre failed.

Before MacKenna will appear you must complete the Nuevo Paraiso missions and advance into West Elizabeth.

He also is involved with Undead Nightmare

During the course of completing this mission, the following Achievement/Trophy may also be acquired: