Emerald Ranch in The Heartlands, State of New Hanover

Lilly Millet is a ranch maid, who has failed to pay back her loan to Leopold Strauss. She lives around Emerald Ranch, with her boyfriend Cooper.

When Arthur approaches to collect the money, Lilly and Cooper are seen arguing. She will tell Arthur that Cooper has the money, and tells Cooper to give the money to Arthur. However, Cooper refuses to give him the money and attacks him, initiating a fight. Arthur quickly beats him senseless, and after Cooper has been defeated, Lilly begins crying. She tells Arthur to take the money and leave. 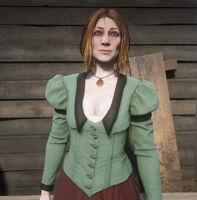 Lilly watching the fight between Arthur and Cooper

Lilly sitting on the bench after the mission is completed