The Litchfield Repeater is a great choice for hunting, with the best damage of all repeating rifles and a large ammo capacity. Despite a slower fire rate and reload speed, the Litchfield excels at medium range combat; perfect when needing to clear an area. While very damaging, the accuracy of the gun can become a issue while moving or at distances.

This repeater is provided during "Goodbye, Dear Friend" and will be available at all gunsmiths thereafter. It can also be acquired for free during "Mrs. Sadie Adler, Widow II".

In Red Dead Online, the Litchfield Repeater can be purchased at any gunsmith for $348.00.

On the counter at a gunsmith 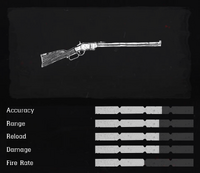 The stats of the Litchfield Repeater

Shown in the Wheeler, Rawson and Co. Catalog 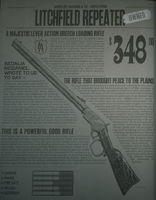