Nothing is known of Lloyd's background.

Lloyd can commonly be found in and around Blackwater. However, he has been known to frequent Armadillo and other locations throughout New Austin and West Elizabeth.

Lloyd can also be found at a camp in the wilderniss in West Elizabeth. Upon approaching he wil fire a warning shot and tell Marston to leave. If Marston advances to Lloyd he will turn hostile and shoot the player whilst sending a dog to attack the player. Upon killing or hogtying him the player can loot his chest, which will contain some decent money, along with a random ammo type.

In Undead Nightmare, Lloyd can be found defending the settlement of Plainview, where he is on top of one of the oil derricks. If Plainview is saved and Lloyd survives, he will sit with Charlie Bengle by the shack.

Lloyd can also be seen during a random encounter in which he is found in the wilderness sitting at a camp. The area is littered with bones, but Lloyd will invite the player over and begin telling stories, soon revealing he had to kill his brother and, unable to get provisions in any other way, eat his corpse. If the player does not already have one, searching the area will reveal a treasure map or, if the treasure map has already been obtained, ammunition. However, searching the area will cause Lloyd to turn hostile, exclaiming that the player is robbing him.

Despite not being one of the Missing Persons rescued during the Undead Nightmare, this official shot shows Lloyd being rescued by Marston. 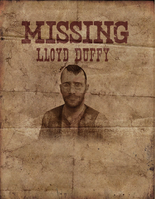 As further proof Lloyd was intended as a Missing Person, his unused missing poster is found embedded on the Undead Nightmare game disc.
Add a photo to this gallery
Retrieved from "https://reddead.fandom.com/wiki/Lloyd_Duffy?oldid=399100"
Community content is available under CC-BY-SA unless otherwise noted.