Tall Trees (singleplayer)
Barranca (multiplayer)
Lobo is a rare animal found in Red Dead Redemption and a part of the Master Hunter Challenge.

Lobo is a giant solid black wolf with glowing yellow eyes. He can be hunted and skinned. After killing him, the player can sell his provisions.

In Singleplayer, Lobo can be found near Aurora Basin, in the Northwest end of Tall Trees in West Elizabeth. He must be killed and skinned to complete Master Hunter - Rank 10, along with Gordo the Boar and Brumas the Bear.

Find the legendary wolf "Lobo" and kill him.

In Redemption Multiplayer, Lobo the Wolf can be found in Barranca, a small area in Nuevo Paraiso, just south-east of Chuparosa. Lobo will appear after killing waves of wolves that spawn. He is indicated by a red skull on the mini-map. When located, he spawns with another wave of wolves, 2-4. 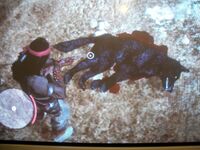 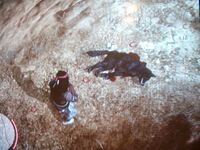