Nothing is known of Lonnie's background. He wears a suit and bowler hat, suggesting that he is fairly well-to-do, or perhaps an undertaker.

Lonnie can most often be seen wandering around the streets of Thieves' Landing. However, he has been known to frequent both the saloon and brothel. He can also be seen around Blackwater and Plainview. Lonnie is also a stagecoach driver who is known to operate out of Armadillo. He can also be seen in one of the rooms in Casa Madrugada, usually sitting at a desk at night. He also appears as a dead body at the campfire in the mission "Spare the Rod, Spoil the Bandit". 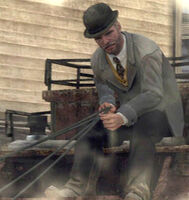