Lowry's Revolver is a custom Navy Revolver associated with serial killer Edmund Lowry Jr., although he is never seen with it in game. The weapon resembles a standard Navy Revolver stained with blood, and has writing and tally marks etched onto the barrel and grip. While it cannot be customized, the weapon already has all the modifications available to the Navy Revolver.

After solving the "Los Santos Slasher" mystery in Grand Theft Auto Online and killing 50 NPCs or players in said game with the Navy Revolver, Lowry's Revolver becomes available in Red Dead Online. It can be found in a lockbox in Lucky's Cabin. 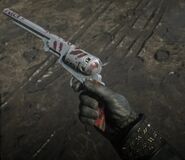