“Now Herr Müller, let's calm down. There must be some mistake.”

“There is no mistake. Your Yankee friend here is a fucking cheat.”

Lucky in Love is the thirty-second mission in Red Dead Redemption, where the player learns to play poker and dueling.

Marston approaches Landon Ricketts in the town of Chuparosa, and joins his game of poker with some locals, including Andreas Müller.

The player sits down and plays poker with Ricketts and his friends. After two hands, Müller will accuse Marston of cheating, and after a stand-off over the table, Ricketts convinces Müller to accept a duel. After winning the duel, Marston and Ricketts have a drink. As they do so, The Stranger, a friend of Müller and a participant in the poker game, will approach, holding a knife to a girl's throat, threatening that he'll kill her. Marston is forced to kill the man, in order to save the girl's life.

"Hey, Mr. Marston. How are you keeping sir?"

"Garçon, champagne for everyone!"

"Well, Mr. Marston, would you like to join us?"

"Now, Herr Müller, let's calm down, there must be some mistake..."

That ain't just an itch on his leg...

Müller: "There's no mistake! Your Yankee friend is a fucking cheat!"
Marston: "Easy there, Germany, calm yourself down."

"Yeah, I know exactly what I did, friend, which was nothing!"

"You... you planted this guy, Ricketts!"

"Now why would I do that? I've already beaten you. Now let's calm down and finish the game."

"There is no more cards game!"

"An impasse, sir. An impasse. We could all die here and now."

"I'm not fighting you, Ricketts. But the Yankee, him I don't like!"

"Outside.
Winner takes the pot."

"The winner will take whatever he wants..."

"...the other man will be in no position to argue."

"You! The man they call Marston, sí!"

"Well, I must admit, you tourists certainly bring peace and prosperity to this land."

Ricketts: "Then again, I doubt Müller will be missed."
Marston: "He wasn't much of a poker player."
Add a photo to this gallery 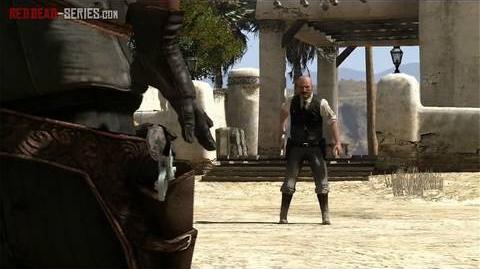 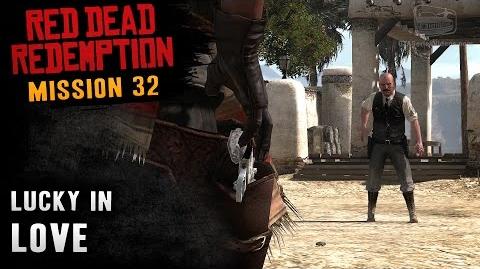 Retrieved from "https://reddead.fandom.com/wiki/Lucky_in_Love?oldid=406065"
Community content is available under CC-BY-SA unless otherwise noted.