With the addition of the Liars and Cheats DLC pack, Luisa Fortuna is also a multiplayer character model that may be selected in the 'Redemption' section of the Outfitter.

She is a 19-year-old school teacher and rebel in Nuevo Paraíso, Mexico. She is a very dedicated and zealous revolutionary, and is said to fight as well as any man.[1]

John first meets Luisa when he and Landon Ricketts rescue her from a government jail at the behest of her brother Emilio Fortuna. John soon discovers that Luisa has fallen for the leader of the local rebellion, Abraham Reyes, expecting that they will soon marry. Quite to the contrary, Reyes simply views Luisa (among other women) as a peasant and uses her for sex, while forgetting or confuses her name several times (often with "Laura") throughout the game. Regardless, she remains unendingly faithful to him and his rebellion. Luisa is unconcerned about about how Reyes views her and how he forgets her name she still loves him and still cares for the his rebellion no matter what happens and no matter what Reyes says or does. Because of her love and loyalty to him and her country Luisa is willing to do anything for Reyes rebellion.

Her relationship with John deteriorates throughout the time they know each other, despite all the favours he does for her. In "Father Abraham", she claims that she "cannot forgive [him] for helping Allende", which may explain why she appears to be less friendly with him after the player has completed all of the missions for the Mexican Army. She does, however, seek John's help; she asks him to escort her sister over the border into the United States, asks for his assistance in freeing Reyes from El Presidio, and persuades him to join a guerrilla attack on the Army to avenge her father's death. Later, she organizes an assault on Sepulcro in order to kill Captain de Santa.

During "An Appointed Time", after John witnesses the war crimes being carried out in Escalera by the Mexican Army, he comes across Reyes, who is about to be executed by Raul Zubieta and two of his men. As John tries to negotiate Reyes' release, Luisa appears and blindly charges at Zubieta, wielding a knife. Zubieta and his men then shoot Luisa through the chest three times, killing her. Enraged, John shoots Zubieta's two soldiers before being challenged to a duel by him. John kills Zubieta, avenging Luisa's death, before cutting Reyes free and continuing with the battle. Afterwards, he confronts Reyes about Luisa's martyrdom; for the final time Reyes fails to recount who she was, even though she lived and died for him. 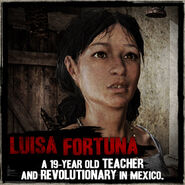 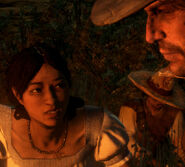 Luisa and Marston talk about the future of Nuevo Paraíso 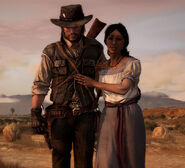 Luisa is assisted by Marston 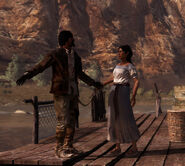 Luisa is serenaded by Abraham Reyes