The Lusitano is a horse and transport featured in Red Dead Redemption.

The Lusitano is a two star rose grey horse. Like most two star horses, it has average speed, average stamina, and average health. The base price is $250. 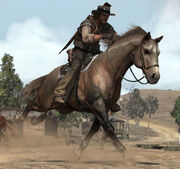 John Marston on a Lusitano
Add a photo to this gallery

Retrieved from "https://reddead.fandom.com/wiki/Lusitano?oldid=373781"
Community content is available under CC-BY-SA unless otherwise noted.