At one point, Lyle met a woman named Beatrice. The two of them eventually got married and had a child together, who they named Arthur.

Lyle was a known outlaw and was eventually arrested for larceny in 1874. He died at some point later, possibly by hanging, which Arthur witnessed.

Lyle was known to beat Arthur as a child, implying an abusive or strained relationship. In regards to his death, Arthur says "it weren't soon enough," and refers to him as a "no good bastard" in a journal entry after his tuberculosis diagnosis. Despite this, Arthur keeps a picture of him next to his bed over two decades later and also wears his hat, hinting at some measure of fondness. 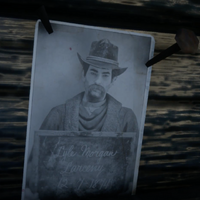