“I don't think I've ever seen a ranch with its own store before.”

In Red Dead Redemption 2, players can visit MacFarlane's Ranch. There are, however, some differences since the game takes place before the story of Red Dead Redemption: some buildings are not built yet, such as the foreman's office, general store, and the barn. The ranch is almost empty, as the MacFarlane family temporarily left due to a death in the family.

MacFarlane's Ranch is a cattle ranch, home to Bonnie MacFarlane and Drew MacFarlane, and the largest ranch in the game. The ranch plays a key supporting role in the narrative of Red Dead Redemption, especially the first chapter. In addition, the player can find work here such as cattle herding and nightwatch jobs. On the ranch, there is a small foreman's office, a general store, a doctor's office, a train station, a large pen for cattle, a corral for horses, a large barn, and a small chicken coop (with the doors being open, as the chickens are often roaming around the ranch).

It is one of the first places that the player will visit in the game. Here, Marston will awaken after an initial confrontation with Bill Williamson. After recovering, Marston will follow a few tutorial missions introducing the player to the gameplay mechanics.

All of the story missions in the Bonnie MacFarlane mission strand begin at this location. The Irish mission "On Shaky's Ground" ends here and a portion of both Abigail Marston missions "The Outlaw's Return" and "Old Friends, New Problems" take place in this location.

Despite the best efforts of the ranch's residents and workers, the ranch has not been spared the destruction of the undead uprising; the undead prowl the street, attacking any living thing they can get their hands on and the town's survivors have been forced to either flee or get to high ground, grab the nearest weapon they can get their hands on, and focus on trying to eliminate the undead hordes clawing at their feet. Bonnie MacFarlane has locked herself inside her family home, and Drew MacFarlane has decided to take on the difficult task of herding as many of the undead as possible into the barn in a vain attempt to allow the other residents to carry on with their day-to-day lives.

In the Undead Nightmare DLC pack, this is one of 23 locations that must be cleared of the Undead and then protected from re-infestation thereafter. Also during the Undead Nightmare, the side-mission "Paternal Pride" begins and ends at this location. Once the mission is completed, the player will receive the Winchester Repeater. The survivors defending the ranch are Solomon Flake, Granville Berry, Eunis Randle and an unknown woman.

In Multiplayer, this is one of 7 locations that has a Land Grab game available. The post to start the game is located on the on top of the foreman's office.

These following information only pertains to Red Dead Redemption.

Located within MacFarlane's Ranch is a safehouse (shed), accessible to the player early in the gameplay narrative. It is the very first safehouse the player is given. It's located near the pen where the horses are kept. In there, you can find a chest with ammo in it. You can save your game here as well.

In the Undead Nightmare DLC the player has a different safehouse instead of the shed, which is the cell in the Foreman's Office where the player can save, change outfits, and fast-travel to another destination.

Bonnie and John patrolling at night on the ranch

The back side of the ranch

The Foreman's office on MacFarlane's Ranch 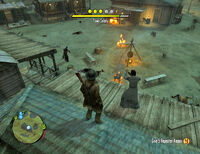 The ranch in Undead Nightmare

Bonnie MacFarlane's house on her ranch

A part of the Southwestern Railroad Company, and The Overland Freight Company

Marston and a ranch posse

Flag of MacFarlane's Ranch, seen flying at the train station.