All of them are children of Drew MacFarlane and his unnamed wife, and are hence brothers of Bonnie MacFarlane. Their names are Hank, Owen, Gus, Ethan, Cole and Patrick.

Cole's age and birth date were not on his grave; however, the death date reads 1899. Hank was the first born of the deceased MacFarlane brothers and was also the first to die. Owen was the second born and the second to die. Gus was the third born son, and Ethan the last. Ethan and Bonnie were born in the same year, which implies the possibility of the two being fraternal twins. All of the deceased brothers are buried at Coot's Chapel.

Because most of the brothers are dead, they are not seen or interacted with in-game.

However, one brother is apparently still alive and is mentioned by Bonnie as being a banker in New York. She does not give his name, although people in the Warthington Ranch and Armadillo can be heard speaking of "the success of Patrick MacFarlane, working in New York," which suggests that is his name. 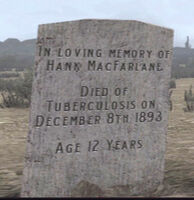