“When sober, Private Jones reminds me of a "Mad Dog". When he's had too much whiskey to drink, the only way to deal with him is with a leash and muzzle. The only difference between soldiers like him and mad killers is the fact that Jones wears a uniform and kills legally.”

This character is not available in Showdown Mode, however he has four recoloured character models.

Jones is a soldier that works for Governor Griffon in his private army and likes to have a drink on the side which has a bad effect on his sanity. Like with most NPC's in the game, he is more of a character type than a specific individual.

The Mad Dog is encountered many times as an enemy during the three last missions of the game when Red Harlow, Jack Swift and Annie Stoakes assault Governor Griffon's Mansion.

He is encountered outside and inside the mansion. He will usually be shooting at the player from above the mansion's roofs or balconies with rifles. He was killed during the events of the game.

His character model can specifically be seen standing next to Griffon himself during the last mission "Fall from Grace" with Rat Chavez, pointing his rifle at Harlow and Buffalo Soldier.

His page can be unlocked after the player purchases the Choke Leash, hence his journal description. He is categorised under the Protectors of Brimstone. 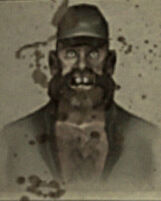 Retrieved from "https://reddead.fandom.com/wiki/Mad_Dog_Jones?oldid=398355"
Community content is available under CC-BY-SA unless otherwise noted.