Magicians for Sport is a mission in Red Dead Redemption 2.

Arthur and Charles go to track down Trelawny at his rental caravan in Rhodes.

Remembering Trelawny's warnings about bounty hunters in the area, Arthur goes to speak with Dutch, who brushes it off as most likely a rumor, but nonetheless asks him and Charles to go check on Trelawny, as they haven't heard from him for some time. The pair investigate his caravan in Rhodes and find signs of violence, before deducing that he must have been taken by bounty hunters.

Arthur and Charles track Trelawny's trail to the woods, where they find two men - with Trelawny's broken cane next to them. They each subdue a man and interrogate one of them, who informs them that Trelawny is being held at a nearby farm.

The pair then find Trelawny and the bounty hunters (working under Cole Stoudemire) who kidnapped him within the Braithwaite family's corn fields, but the hunters scatter into the field upon being discovered, forcing Arthur and Charles to search for them in a game of cat and mouse.

After dealing with all three bounty hunters - one of whom was hiding in the barn and shooting at them - Arthur and Charles return to Trelawny, who claims that he told his kidnappers nothing. He then decides to stay with the gang at their camp, until it's safe to live on his own again.

The mission ends with Charles and Trelawny leaving Arthur and riding back to camp. 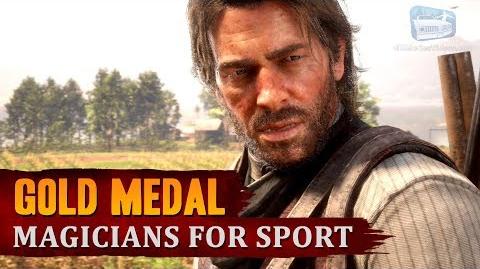