Mama Watson is a minor character featured in Red Dead Redemption 2 and a stranger in Red Dead Online.

Mama Watson is the leader and mother of the Watson Boys.

The protagonist can encounter Mama Watson at Watson's Cabin in Big Valley, West Elizabeth. She will not be afraid of them and will even offer them some of her stew, before enlisting them to release some outlaw associates of hers from a jail wagon.

Arthur Morgan has the option of interacting with and robbing Mama Watson inside her house. She initially assumes that Arthur is working for her and tells him to place whatever he has in the cellar.

Arthur will reluctantly head down into the cellar and find an encased semi-automatic shotgun. Once Arthur returns upstairs, she realizes that he isn’t who she thought he was, and warns him to leave. She then leaves the cabin on a donkey (unless Arthur previously killed or stole it, in which case she will flee on-foot) and threatens to bring her sons. Arthur also has the option of killing her during this encounter.

Kill - If Arthur later returns to the cabin after killing Mama Watson during her first interaction, there will be a grave out to the side of the house; the player can interact with it, saying "Couldn't have happened to a nicer woman". After this, Arthur can enter the cabin and kill her sons, who rightfully assume that he was the murderer.

Spare - If Arthur later returns to the cabin after sparing Mama Watson, her sons will be there to tell her about trying to use the money they get from their criminal exploits to move her out of the country. She will express disinterest in the plan. If Arthur attempts to enter the house, the brothers will attack him, and he has the option of killing them all, subduing them, or simply running away. If all of her sons are killed, Mama Watson will curse at Arthur; she can be killed as well.

If Mama Watson is spared throughout her encounters, her rotting corpse can be found in her bed.

Alternatively, if Arthur never interacts with her, John can do so in the epilogue, with the same scenario and options as with Arthur. 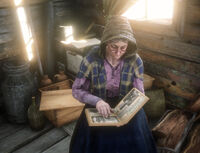 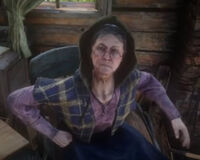 Mama and her sons on an old photograph