The Mammoth is a point of interest featured in Red Dead Redemption 2.

The Mammoth is an enormous carcass of a prehistoric animal located in Grizzlies West, Ambarino. While most of it is either covered partially or completely by snow, its long and curved tusks stand proudly above the snowy landscape. 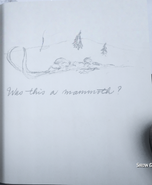 Arthur's drawing: "Was this a mammoth?" 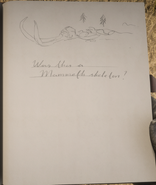 John's drawing: "Was this a mammoth skeleton?"